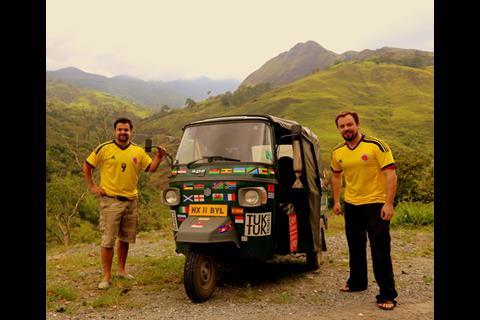 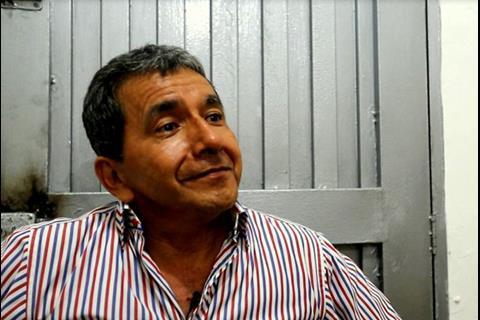 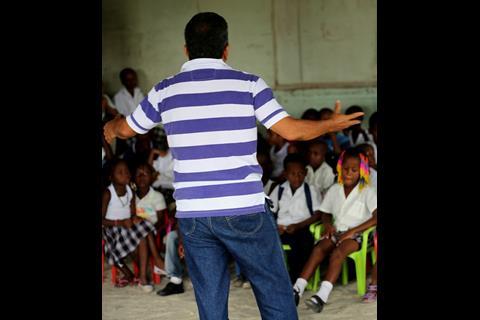 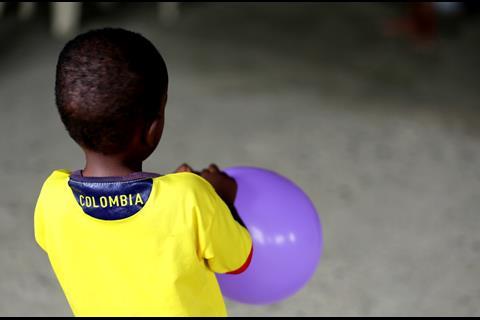 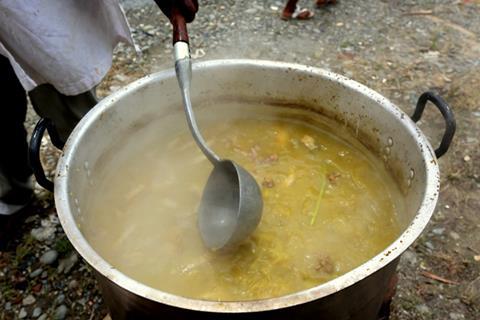 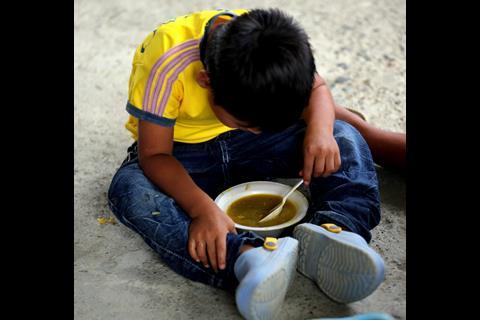 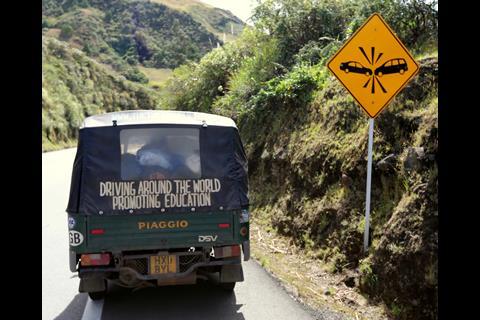 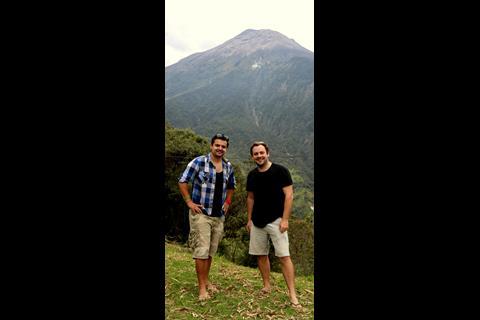 By a volcano near Baños, Ecuador 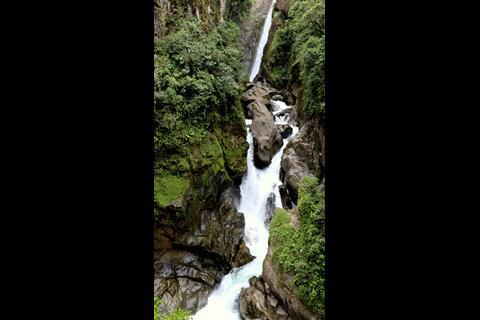 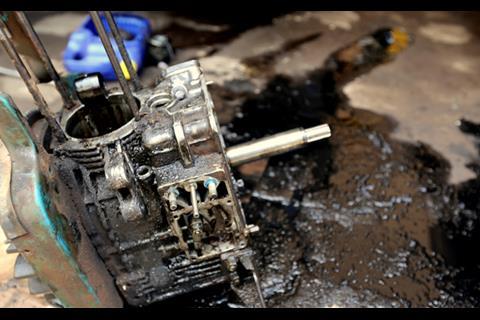 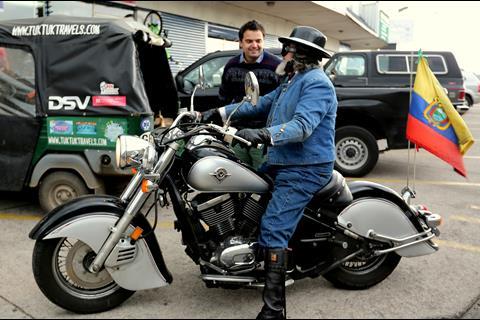 In their twelfth travelogue, Rich and Nick visit two local education projects in Colombia and Ecuador, but one member of the team is feeling a bit under the weather …

When planning a round-the-world expedition, it’s always those blue bits on the map that are going to cause some of the most intense agony, and our journey certainly hasn’t been an exception to this rule. In fact, the novel nature of the tuk tuk has only perpetuated our pain. With mounting customs requirements and escalating shipping delays, our vehicle’s eventual arrival in Buenaventura, Colombia seemed like a miracle. The obligatory fortnight spent navigating port bureaucracy tried our patience, though it did provide us with some marvellous experiences …

At that time, Colombia were playing Chile in the football World Cup qualifiers. Stepping out of our hotel, we were swept away in a sea of yellow shirts flowing down to the old town’s main strip. Every man, woman and child had put the rest of their life on hold, pulled on their Colombia jerseys and taken to the streets. When the second of Falcao’s late penalties hit the back of the net, clawing Colombia back from 3-0 down to a 3-3 draw and earning them a place in 2014’s World Cup in Brazil, the crowd erupted. Toddlers were dancing on tables, grandmothers were shrieking with joy, free drinks were passed round for all to share … This was not what we were expecting from one of Colombia’s most dangerous cities.

In 2007, when conflict peaked between local street gangs and larger drug trafficking organizations, Buenaventura was proclaimed the most violent city in Colombia. A local journalist and lawyer, Jesús Gabalán Rodriquez, reassured us that the homicide rates have dropped since then, but the impact of drug and gang-related strife still scars the region. We are told that unemployment, poverty and insecurity are rife, and it’s the children who particularly suffer – many have to survive on only one meal a day and education becomes the least of their worries. It was in response to these problems that Jesús established Fundación Pacifico Colombiano, a foundation seeking to improve the well-being of children in the area.

Every week, Jesús and his inspirational team of eager volunteers travel to a different neighbourhood in the poorest areas of the city. One Wednesday, Nick and I were privileged to join them. Basing themselves in local schools, the team seek to engage the whole community in their activities. They play games with the children, promoting different values and principles through storytelling, and they start a dialogue with the adults, working with them to pursue lost dreams – of starting their own business, of going back to school. The highlight of the day, though, is the sancocho 200-250 plates of this hearty, traditional stew are served up each week for everyone attending. “The main purpose”, Jesús explains, “is to bring people together and encourage them to follow their dreams, because those dreams can come true. How old you are isn’t important – with education, anyone can realize their dreams.”

With the tuk tuk finally released, proudly wearing our new Colombia football shirts in the hope they’d help us out in the event of any police checkpoints or rebel road blocks, we made our way south into Ecuador. Now, Tommy isn’t a fast vehicle and he’s always had difficulties with hills, so we’d expected the traversing of the Cordilleras of the Andes to be a challenge. Something was wrong, though. Seriously wrong. Cyclists were overtaking us as we crawled uphill. The engine spluttered as we rolled downhill. While this did give us plenty of time to appreciate the dramatic green valleys and the occasional jutting, snow-tipped peak, our 15kmph average speed was causing some consternation. When we eventually arrived in Quito, we quickly sought help. Our worst fears were proved right. Tommy was dying. Still stranded here one week later, we’re gradually working through the mechanic’s list of worn out parts that need replacing: air filter, oil filter, fuel filter, fuel injection pump, full set of engine seals and gaskets, piston, piston rings, pump rods … The list goes on.

In breaks from staring forlornly at our tuk tuk, whose dismembered engine looks like the most violent of crime scenes, we have had the opportunity to explore Ecuador’s capital and meet up with the Refugee Education Trust (RET) to see some of their work here. RET strives to assist communities to meet the educational needs of young people made vulnerable by displacement, violence, armed conflict and disasters. Ecuador has the largest refugee population in Latin America, with over 150,000 people – mostly from Colombia – requesting asylum in the country over the past decade. The majority of refugees remain unregistered and, even for those granted refugee status, finding employment and accessing basic services is a struggle. Negative perceptions of the displaced have caused significant tension between local and refugee populations.

RET helps protect refugees in Ecuador by providing them with access to education, psychosocial assistance and vocational training, while encouraging and fostering integration between local and refugee populations. We spent a fantastic afternoon with a group of Ecuadorian and Colombian teenagers engrossed in an exciting new film production project. Having learned the basics of directing, filming, producing and editing, the group were busy working on a short film about child labour. Through the course, close friendships have been forged, bridging the divide between refugee and local. Many of the children we spoke to had achieved more than simply making new friends though; they had new dreams of building on this training and pursuing a career in this field. “This type of education is interesting, it’s fun and it’s something we’re passionate about”, one of the group tells us. “Using film to address social issues can be very powerful. Now I know this is what I want to do with my life.”

With less than two months left of our expedition, we’re anxious to get back on the road and start making some progress. Here’s hoping Tommy’s been fixed in time for our next instalment …