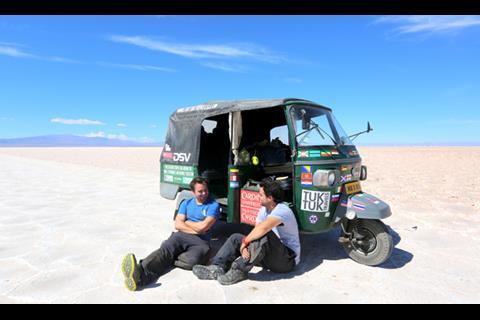 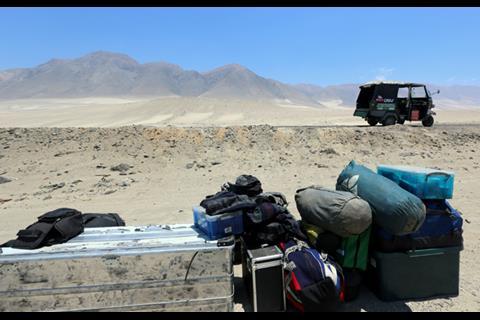 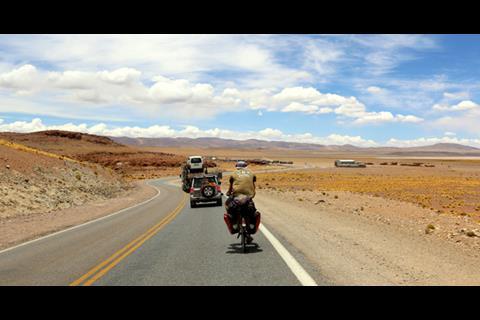 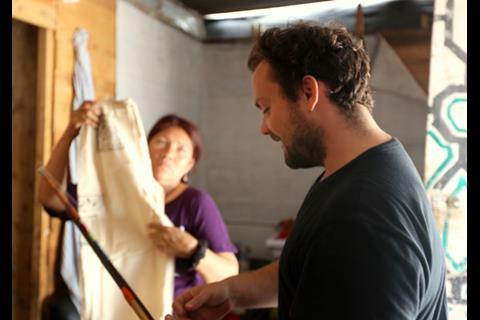 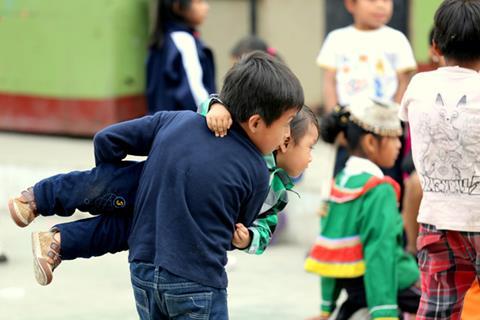 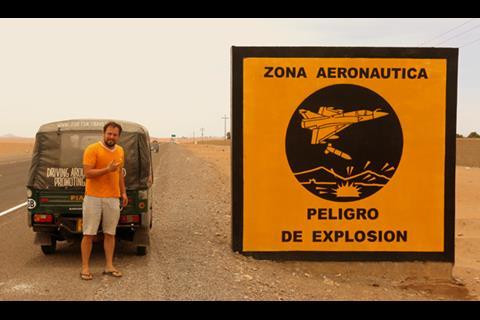 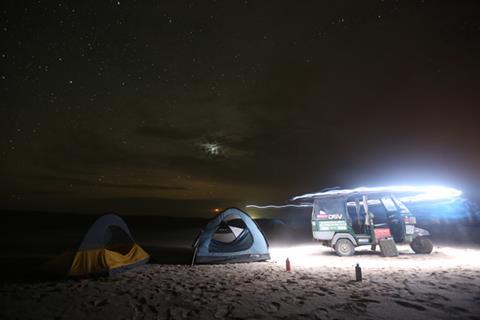 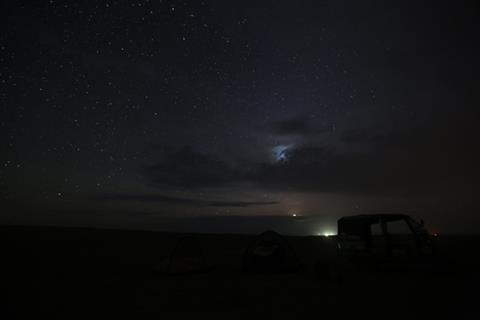 Wild camping in the Peruvian desert 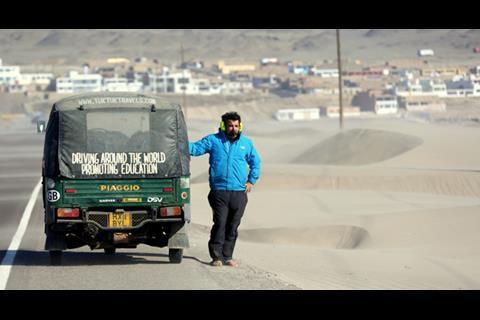 A windy day in Peru 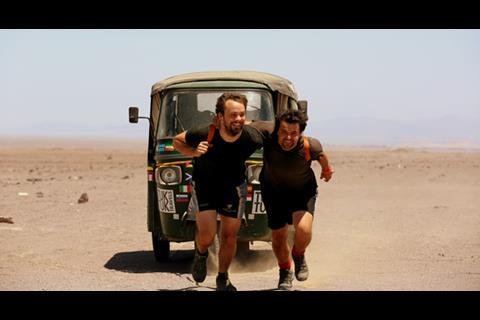 In their fourteenth travelogue, the tuk tuk boys and Tommy meet Olinda, a Shipibo artisan with an inspiring story, chug their way over the Andes and beat all odds to make it to Buenos Aires.

As we ambled into Lima, spirits were high. We were back on the move and, with only a month left of the expedition before heading home for Christmas, we were eager to stretch Tommy’s legs. We still had a great deal of ground to cover if we were to make our flight, not to mention the final, quite considerable hurdle lying in our path – the Andes. We (perhaps over-)rewarded our hard work dragging the tuk tuk over the world record mark by becoming temporary regulars at a local burger joint. Thoughts of any other form of celebration were quashed as we arrived in the city and were informed it would be a “dry weekend” because of elections taking place. How inconsiderate of you, Peru.

Content after a couple of nights sleeping in beds and with bellies full of burgers, we took some time out to visit Cantagallo, an indigenous Shipibo community that had migrated to the city from the Peruvian Amazon. The migration was led by artisans around 15 years ago, making their way to the capital to sell their traditional jewellery, textiles and other wares. Soon others followed, seeking the employment and economic opportunity only Lima could offer. Motives aren’t only financial, though. Olinda Silvano Inuma de Arias, a Shipibo artisan, missed her family and community sorely, but joined the migrant community in Lima with her son and daughter to ensure they could access a good quality education.

The community established their own primary school in 2008, campaigning hard for three years before it was officially recognized as a bilingual school – the first of its kind in Lima. “We were fighting all that time,” explains the school’s director, Gilberto Soto Barbarán, reflecting on how tough those years were. “Children born here in Lima could hardly speak Shipibo, only Spanish. They were losing their culture, their identity. Bilingual education is important as it helps protect, preserve and deepen cultural identity. There is a war between modernity and tradition. Our 200 students are now able to start seeing a way to bridge this gap.”

Olinda, gold teeth glistening through her wide smile, shows us some of her crafts while we chat to her and her children about the importance of preserving their traditional culture. “A woman without culture is lacking something within,” Olinda states sombrely, clasping her chest. “People have fought to keep our culture alive”, adds her son. “Shipiba is a living culture. It’s alive and we can experience it now. That’s a wonderful thing.” With all this talk of fighting, my eyes are drawn to a small bow and arrow in the corner of the room. Traditionally used for catching fish, here in Lima they’re sold as souvenirs to tourists. “That’s a shame,” I joke, “we could have used one for protection for the rest of our journey!” Olinda’s eyes glint, “Oh, it works!” About 12 years ago, soon after the first migrants had arrived, some bandits attacked the community and the women used the bows to defend themselves and their land, dipping the arrow heads in a lethal venomous concoction. “No one wants to die like that. They didn’t come back again.”

Fearing we’d most likely harm ourselves, we decided against arming ourselves for the onward journey and struck out south towards the Chilean border, carving through barren deserts and skirting a sublime coastline rivalling any other we’d experienced. A feisty wind provided a fine curtain of sand, swept off nearby dunes, flowing gracefully over the road. In the distance, the constantly-moving mounds seemed to dance for us, sand swirling and twirling in every direction. Buoyed with a renewed vigour brought on by Tommy’s finely-tuned engine, we sped along laughing and joking about our previous woes, now a thing of past. This was when Fate, with her deep sense of irony, chose to strike once again. We were well-rehearsed in this drill now. As the engine screamed into overdrive, belching smoke, oil and diesel indiscriminately, we hurriedly unloaded all our worldly belongings to get to the engine and shut it off. We sat by the side of the road, struggling to compute what had happened. We were shocked. We were confused. How could this happen again? What had we done to deserve this?

We bluntly discussed our options. We could no longer reach Rio de Janeiro, our intended finish line. That was thrown out straight away with little thought. With our bank account and remaining calendar days draining fast, we were looking down the barrel of a truck back to Lima and a boat home from there. Whatever we’d achieved to that point, this was failure – cold, hard failure. We’d be returning, tails between our legs, dragging a lifeless Tommy with us. It would take a miracle to get him working again, particularly considering the challenges that still lay on the road ahead. That miracle came in the form of Michael, a jovial motorbike enthusiast and diligent Peruvian mechanic. We’d rolled the dice and had elected to truck Tommy to Arequipa (we weren’t turning back just yet), to see if anything could be done for him there. Michael saw things differently to mechanics in the past – the fuel pump had been causing all these problems and, as we couldn’t replace it, why not bypass it? Taking full advantage of his day off, he slaved away all Sunday to install a new pump externally. Tommy now had parts hanging off him and seemed to be largely held together with gaffer tape and cable ties. But, he was ready to try.

A nervous twist of the key. Spluttering, then nothing. “And again”, Michael sternly grunted. We tried again. And again. And again. Nothing. “Again” – Michael’s words were not helping anymore. Cursing our wishful thinking, we kept going until, lo and behold, Tommy burst back to life. Not knowing how long our luck would last, we scooped up our belongings, hugged a bewildered Michael and set off. Buenos Aires was the new destination. If, and it was a big if, we had no more problems, we might just be able to make it, becoming the first people ever to have circumnavigated the world in a tuk tuk.

We sped on, living in constant fear of a similar incident marking the end of all our efforts. The excruciating agony of uncertainty hung round our necks every minute of every day as Peru’s deserts became Chile’s deserts. We’d somehow arrived in San Pedro de Atacama, our last stop before tackling the 4,800m Jama Pass over the Andes into Argentina. “Impossible”, said our dour hostel owner, brutally sharing his feelings on the matter, “It’s too high and your vehicle is too small”. “The road is too quiet, no one is there to help you”, he cheerily added. Well, it wasn’t like we had a choice anymore. Every day involved driving as far as we could towards Buenos Aires. A simple plan, but it was all we had.

Cruising – OK, grumbling – up the steep ascent, we were actually making relatively steady progress. We mocked our pessimistic hostel owner, oh he of little faith. As dark fell, we cautiously crawled off the road and found a beautiful wild camping spot. The warning signs started to kick in. The cold temperatures became the least of our worries as the effects of the altitude started to hit us. Nick and I stumbled around struggling to put up our tents with a slight lack of coordination, dizziness, splitting headaches and nausea. I couldn’t focus on anything but the gruesome thought of my brain gradually expanding in my head as extra blood was pumped there to combat the lack of oxygen in the air at over 4,000m above sea level. I vividly remembered our training from the Lifesigns’ Expedition Care Programme we’d attended prior to our departure. The potential severity of our condition and fears of high altitude cerebral oedema – though my medical knowledge is patchy, for me this translates as a small brain explosion – meant we had to descend fast. The only problem seemed to be that we were on a plateau with a good 200km in any direction before any sort of descent was possible.

Morning came and, with brains still just about intact, we quickly discovered the plateau wasn’t our only problem. Tommy was also suffering from altitude sickness and he refused point blank to start. We tried everything. Assuming perhaps cold diesel was to blame, we even heated two saucepans full on our camping stove to add to the tank. Nothing worked. Piece by piece, we carried and dragged all of our belongings back to the side of the road, cursing the distance we’d travelled the previous night. We were functioning in slow motion by then, which didn’t help our efforts to bump start the tuk tuk with one of us pushing as the other attempted to resurrect Tommy’s engine. Fast forward eight hours. Nick was asleep in the back of the tuk tuk. Was it dangerous to sleep in this state? I would have tried to keep him up were I not lying face down on the warm tarmac of the hard shoulder, struggling to stay awake myself.

“You’re blocking the cycle lane”, someone called out, with a warm and friendly French lilt to their accent. Tommy (the French cyclist, not our tuk tuk – thankfully we weren’t hallucinating yet) had been on the road for two years, making his way down from Alaska. After three-four months at these altitudes, he was devouring the miles. Could he tow us? Seeing the commotion of a shabby bicycle and an even shabbier tuk tuk part-blocking the road, four Brazilian men speeding past in the opposite direction in 4x4s couldn’t help but turn around to snap a photo. One hour later, having towed us to the top of a number of hills, gravity injected life into our reluctant tuk tuk, as a bump start finally coerced Tommy into action. We eventually reached the border in VIP style, with two silver 4x4s and one rusty bicycle chaperoning us.

Argentina was country number 39. It passed in a blur: surreal salt flats; a steep and winding descent quickly relieving the pressure in our heads; bizarre lunar landscapes complete with funky rock formations; a couple of wonderful education projects; picturesque vineyards; our first sign for Buenos Aires; seemingly endless miles of farmland; more signs for Buenos Aires; crazy traffic; delicious steaks; sumptuous Malbecs. 16 months ago, we’d nervously set out from the British Museum in London. Four continents and 42,120km later and we had arrived.

We were in shock. We’d barely dared to imagine this day, especially shrouded in the uncertainty of the past few months. More than six years had gone into the conceiving, planning and executing of this idea, but nothing could prepare us for that moment. Pure relief.