3
Pronunciation skills: Consonants – consciously rediscovering the ON and OFF voice buttons
Support for Teaching Speaking

Pronunciation skills: Consonants – consciously rediscovering the ON and OFF voice buttons

In his latest article, ELT pronunciation expert Adrian Underhill looks at consonants and how consciously rediscoving the ON and OFF voice buttons can benefit both your teaching and your students’ learning. 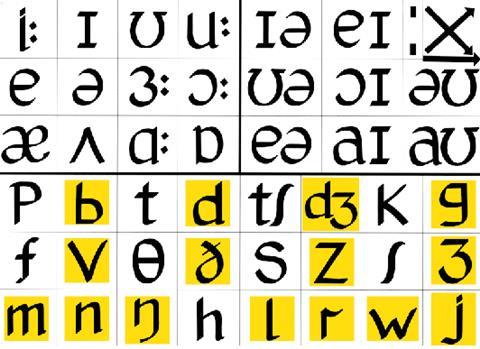 In this diagram the 15 voiced consonants are highlighted. In the first two rows of consonants you can see that each voiced consonant has an unvoiced counterpart to its left. This pairing is a very useful feature for learners of English pronunciation.

In the previous two articles on diphthongs and monopthongs, we saw how to connect with the following three ‘muscle buttons’ in order to produce new and unfamiliar vowels:

Here is the teaching sequence I use for consonants. Adapt this and make your own variations.

1. I silently mime the sound /s/ with my lips, while also performing a sliding snake imitation with my hand. Amazingly, students watching this mime and gesture start to say /sssssss/. sssbefore Diphthongs for more on Using Inner Imaging). Then I point to /s

2. I then mime /z/ with my lips and with my hand I perform a pestering bee or mosquito. Students start to say /zzzzzzz/ and I point to /z/ on the chart. If not then I say it, as above.

3. I stop the mime. Using the chart only I slide the pointer back and forth between /s/ and /z/, and students make the two sounds accordingly. So we establish the sound / symbol correspondence.

4. I ask them to touch their fingers flat against the front of the throat, where the Adam’s apple (official term: laryngeal prominence) is located. Once again, I alternate the two sounds as I slide the pointer from /s/ and /z/ on the chart.

5. I ask the learners ‘What do you notice?’ and they say things like ‘voice’, ‘vibration’ … etc. I agree and suggest we call it ‘voice’.

7. Then I indicate /s/ on the chart and they say it, and I get them to continue the sound /sssss/. While doing that I move my hand (the voice switch) from the OFF to the ON position. Now they make /zzzzz/, then off and they make /sssss/ and so on several more times.

8. Now they should be intentionally and consciously switching their voice ON and OFF, simply in response to the visual cue of me moving my hand onto and off my throat. I now know – and so do they –that they have made the conscious rediscovery of their voice button, and they can therefore ‘voice’ and ‘unvoice’ at will. In addition, establishing this silent gesture to turn the voice on and off becomes an invaluable help in the toolkit of silently correcting pronunciation.

9. Now we have a gesture to indicate the voice ON and the voice OFF and we can immediately apply this to the discovery of the other seven voiced/unvoiced consonant pairs, for example /ʃ/ and /Ʒ/. I put my finger silently to my lips and mime the sound ssshhh and invite students to make it too. And when they do and I point to /ʃ/ on the chart.

10. While they continue this sound I indicate the voice switch ON and they find themselves saying /Ʒ/ the voiced pair. Then I indicate the /Ʒ/ symbol on the chart to show that is what they are saying.

Extending the voice choice to other consonant pairs

Steps 1 - 10 may look long, but it takes about two minutes and is logical and simple. Using the voice ON/OFF gesture enables you to help learners to discover the other half of any voiced/unvoiced consonant pair. If they have one, they can immediately find the other. These pairs are clearly shown on the chart as follows:

The four pairs indicate four positions in the mouth, from which eight sounds can be made using the voice ON or the voice OFF.

Fricative consonants are made by forcing air through a partially open passage. In the second consonant row the eight fricative sounds are arranged from front of the mouth (left) to back of the mouth (right), arranged in four unvoiced/voiced pairs:

Again, the four pairs indicate four positions in the mouth, from which eight consonant sounds can be made using the voice ON and OFF.

Is the sound voiced or unvoiced?

Sometimes you cannot decide whether a consonant sound (in a word in connected speech) is voiced or unvoiced. For example the sound is it /s/ or /z/? Or is it /θ/ or /ð/?

The first test is to say the word aloud very slowly until you can feel and hear the voice switching ON and OFF on individual sounds. Having noted where the voice seems to come ON or OFF, you can check this by unvoicing that consonant if you are saying it voiced, or voicing it if you are saying it unvoiced. In other words do the opposite of what you did in test one. You’ll very quickly hear what’s going on, and what sounds right. This test works in English because every unvoiced sound has a voiced equivalent (except for /h/). Get students to do this too – it exploits the use of the voice button while enabling learners to make new sounds deliberately.

You can see me demonstrating the voice button on two of my mini training videos:

Watch videos 30–39 for demos of teaching the other consonants. All videos are accessible from here.

You can read further techniques in these two posts on my blog: