In his latest article in the Tech Tasks series, Tom Walton looks at how to use Google+ Communities in the classroom exploring how they can be used to help students develop their listening and speaking skills both inside and outside the classroom 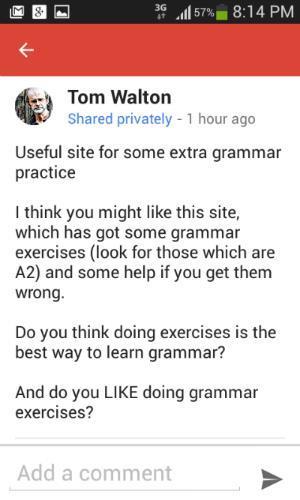 A message I sent to one of my Communities (privately to its members, as you can see), with a link to a website (not shown) that I thought they would find useful. Note how I asked them a couple of questions (hoping to get them to comment and practise their English!

In my previous article, I looked at creative writing with Edmodo. Here, I’m going to look at a similar tool: Google+ Communities. Both sites allow learners to practice similar skills, with Edmodo aimed at young learners and Google+ better suited to adults.

Another big advantage of a Google+ Community is that it works superbly on a mobile phone, as you can see from the screenshot on the left.

A Google+ Community is a wonderful tool for mobile learning, although we can also view it on the web via a desktop computer, and we can get all the posts sent to it in our Gmail inbox.

There are so many ways a shared digital space of this kind could be used, and there is so much that it could give you and your learners. It provides limitless opportunities for language practice, and it’s wonderful for generating good group dynamics.

The lesson plan below is designed to get your learners started with their new Community, but ideally you’d take it further and they would continue to use it to share and comment on other things throughout the term or year.

LEVEL B1 or above – the higher you go, the more useful it becomes

AIM To introduce the learners to their Google+ Community, and to get them excited about using it

TOOLS REQUIRED First of all, you the teacher will need (1) a Gmail address. You then need (2) to create your first Google+ Community https://support.google.com/plus/answer/2872671?hl=en, and (3) make sure that you make it private – which is, in fact, the first thing you are asked to decide when you create a new community. Do you want it public or private? Choose private! Teachers and learners are sometimes reluctant to use social media to share things. However, Google+ is designed to be used privately. My learners don’t have a problem with the idea when they know that what they share is seen only within the private Community that I’ve created for the class. You then, (4), need the Gmail addresses of all your learners (if they don’t have one, they’ll need to create one). Finally, (5), you have to send them an invitation to your community, which is very easy.

Tip: Make one of your learners responsible for collecting everyone’s Gmail address and sending them to you in a single email. It will save you a lot of work!

How to teach the lesson

1. Creating your groups: Within your community, your learners are going to work in small groups before all posting to the same group. Divide your class into small groups of 3 or 4. Ideally, put at least one technically-savvy person in each group. If you have Facebook users in your class, they’ll find a Google+ Community very easy to use, as they are so similar. If your learners really don’t use technology much, be prepared to demonstrate for them. Unless you are using a computer room or tablets, you will need at least one smartphone per group.

2. Establishing objectives and rules: Each group forms a team, who are going to post up to three things of interest to their classmates, in separate posts. Their objective is to see who can get the most comments on their posts from people in the other groups. (Your objective is for your learners to get as much language practice as possible, of course.)

Tip for learners: in each post, ask your classmates at least one interesting question! Here’s an example: 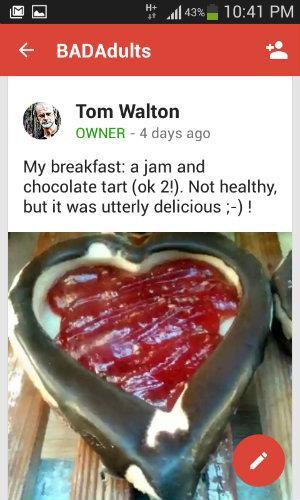 My breakfast: I posted this to one of my Communities and asked them (below the image – not shown) to (1) photograph what they had for breakfast next day; (2) say whether or not their breakfast was healthy; and (3) compare their breakfasts with everyone else’s – by commenting on their photos. 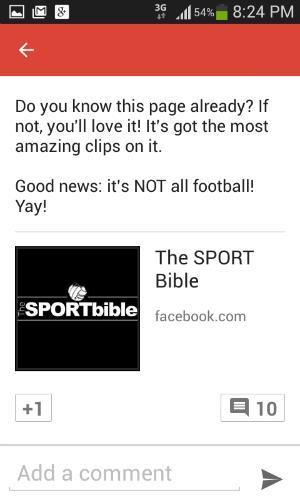 Another message with a link to a Facebook page I knew they’d like. Note how I’ve already got 10 comments there, bottom right of the image.

3. Editorial team meeting: Learners should pick the subjects they are going to post about and collaborate on writing them. If you have one device per person, they can work on individual posts once they’ve agreed on three subjects. Your job at this stage is to provide any language they might need. Monitor and offer help where necessary, as this will reduce the amount of subsequent correction that might be required.

Tip: First, have a ‘tech-free first 5 minutes’ in which your learners aren’t allowed to touch any technology. It will encourage them to talk to each other.

4. Posting: As soon as your learners have their first post ready, they should send it. They don’t have to have all three ready before they post the first. Note that posts on Google+ Communities have to be assigned a ‘Category’. You might want to establish a few categories first (things like ‘Important’, ‘Useful links’, ‘Just for fun’, ‘Exams’, ‘Videos’ and ‘Other matters’ are ones I have used). You could use ‘Editors’ for this activity, and could have a category for each team, but note that you can only have a maximum of 20 categories in a Community.

5. Commenting: Stages 4 and 5 can overlap. New posts will arrive (1) in the learners’ Gmail inboxes, as well as (2) on Google+ on their phones, but they can also (3) read them directly on the Community page, which they might want to ‘bookmark’ – i.e. make a ‘favourite’ – so they can find it again easily. I recommend that you join in and write comments yourself, as you can see in the next example. 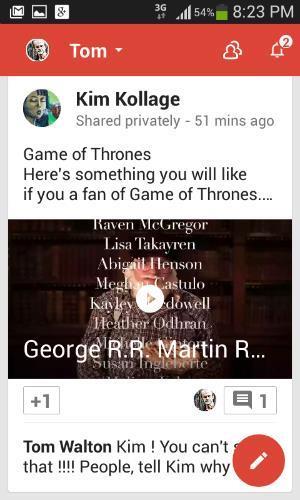 Kim has posted a video of author George R.R. Martin, which we can play back directly on our Community page or phone, without have to go to YouTube to view it. Note how I’ve commented: Kim didn’t include a question – so I did, to encourage discussion, saying, ’People, tell Kim why Game of Thrones is the best series EVER!!’

You might also include any further language assistance in your comments. You could also at this stage suggest corrections to any of the original posts (which the authors can edit after posting). For the latter, I like to walk round the class and do that there and then, rather than having to correct afterwards.

Don’t worry if you don’t have enough devices for everyone to have their own – you can encourage group discussion and then one person in the group can reply for the group.

If your learners do have a device each, you’ll probably notice a delightful thing: suddenly, you will have silence in your classroom (or just the sound of keyboards if your learners are using computers). They’re all commenting and engaged! Wonderful!

A Google+ Community of this kind works wonderfully not just for one class but longer term. It can be used for whatever digital activities your learners are doing and for sharing the end product (creative writing, podcasts, etc.) of those.

You can also keep the ‘editors’ activity going. What works well is to have one group creating three posts each week, with another group taking over the following week. The objective is still to obtain as many comments as possible from the rest of the class.

I’ve suggested a Google+ Community here for adults, but younger learners could do exactly the same thing with Edmodo. Alternatively, you could use a blog on which you make all your learners ‘authors’. Blogger would be the tool I would recommend for that.

If you prefer each group to have their own separate magazine, Tackk is an interesting alternative. Note, however, that you will probably get far fewer comments if you have separate magazines – and you want comments, as they give you interaction and communication and more language practice.

And, yes, you could use a Facebook group for the same thing (but would all your learners/their parents want you to …?).

If your learners opt to have ‘notifications on’, they’ll get any new posts via email. That’s great for keeping the discussion going. They can turn notifications off, if necessary!

I’m a huge believer in having a digital space of this kind for language learners. I’d love to hear how you get on if you try the idea out, or need any additional help.