By Brian Boyd and Thom Kiddle

Our very own dynamic duo, author Brian Boyd and story contributor Thom Kiddle, join forces to unveil (but not unmask!) the characters featured in the Grammarman comic strip.

He’s the Correction Crusader, the Accurate Avenger and the Last Librarian. Grammarman came to Earth from a distant outreach of the universe and the far-flung future. His people, a peaceful race of knowledge gatherers known only as The Librarians, sent the infant Grammarman back through time to safeguard the English language. Now, as Verbo City’s guardian of grammar, our hero operates from his hi-tech headquarters, The Vocabu-lair, in the heart of the busy, modern metropolis. Grammarman can detect errors, just as Spiderman’s tingling ‘spider sense’ warns of nearby danger. He’s also the world’s greatest reader and can sometimes read thoughts. In a city where the never-ending tide of careless mistakes brings fresh challenges every day, Grammarman needs all the help he can get.

Syntax and Alpha-bot are Grammarman’s loyal and trusted friends and fellow fighters against linguistic infelicity. Alpha-bot is an android with a phenomenal understanding of grammar and lexis, and a knowledge store so big it makes the internet look like a cassette tape. Syntax is a visitor from a distant galaxy who came to Verbo City to improve his English. Not much progress there so far, as he generally emits nothing more than gurgling noises. However, the fact that he can communicate via telepathy makes his lack of language proficiency largely irrelevant and, with his elastic limbs, he is a fearsome opponent for Verbo City’s grammatical ne’er-do-wells. Together, Alpha-bot and Syntax are Grammarman’s guardian angels, getting him out of at least as many scrapes as they get him into, and solving complex language puzzles along the way.

The sewers, skyscrapers, suburbs and slums of Verbo City are awash with all manner of nefarious linguistic villains. There is high-class conman Percy Perfect, who has crafted all sorts of elaborate tenses to extort, rob and swindle, and the no-nonsense ruffians, Butch Clausidy and the Sentence Kid – phrase rustlers with a penchant for relative clauses. Watch out for the innocently destructive Article Ants, who leave a lack of determination in their wake, and the syntactically twisted deviants Luthor Lexis and The Wizard of Was. Beware the terrifying Auxilla, who leaves innocent verbs and citizens helpless, and don’t be fooled by the punctuation pranks of Sammy Colon! You’ll meet them all and many more besides as you help Grammarman and friends restore language law and order to Verbo City’s unruly streets.

Brian Boyd has been writing and drawing Grammarman since 2005. The concept for the comic grew from a conversation with regular Grammarman collaborator, Thom Kiddle. If the English language had a hero with super powers defending it, who would it be? What would he look like? Which unusual villains would he fight? The basic idea was to harness their students’ enthusiasm for comic books with a fun and engaging learning resource. To this end, they decided to incorporate a puzzle into every comic, focusing on a different language point each time. Upon finishing an episode of Grammarman, the reader is invited to help the Correction Crusader by re-reading the comic for clues and answers needed to solve the crime. From scribbled notes and doodles on scrap paper to digital colouring, lettering and finishing, creating an episode of Grammarman is a process lasting from five to ten days, although many story ideas develop over a much longer time as ideas are passed back and forth. 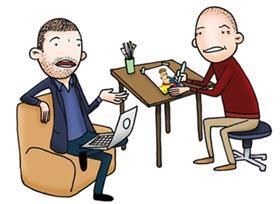 Thom Kiddle is a long-time contributor to, and editor of, Grammarman episodes. He is a devoted user of the Grammarman comic and website with students and teachers and he has written about their use in ELT magazines such as English Teaching Professional. He believes that the power of Grammarman lies in its appeal on multiple levels – from students to teachers and from clear storylines to clever in-jokes – and the way it taps into Csikszentmihalyi’s (1990) Theory of Flow: the story, characters and style carry the reader-learner through to the language puzzle with energized focus, involvement and enjoyment. Not only is it an innovative, engaging and non-threatening way to look at grammar and lexis in the classroom but it also offers a huge range of possibilities beyond the language-related focus of the individual puzzles. These possibilities include: