Here, in her fifth diary entry, teacher Laura McGinnis talks about the beautiful city of Prague and how she came to be here. 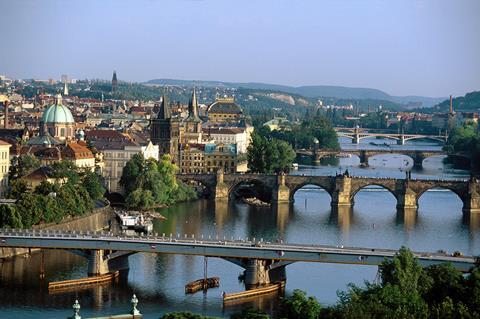 On Thursday morning I arrive to find my post-secondary class waiting in front of the building. I eye them suspiciously. Normally they pass their thirty-minute break in the classroom, chatting or playing with the children’s games on the back shelf. We are not having class today, they inform me. Instead, we are going on a walk.

Because only half of them are there, because it really is a beautiful day, and mostly because I know that the lesson I’ve planned is fairly dull, I consent. But there are some ground rules. We are taking a tour of Prague, and they will have to tell me about the sites that we pass. In addition, they must give me directions to each site before we walk there, since Direction Giving was the topic of today’s scrapped lesson. So for the next hour, we walk through the tourist district of Prague, stopping occasionally for my students to give brief reports on the history and function of various sites. I would like to continue for the last half-hour, but the sunshine belies the chill of the day, and I have to concede that my students look miserable. So the class concludes in a small café I know near the city centre.

We order tea, and my students take advantage of the relaxed class structure to ask me questions. I am waiting for the inevitable question, and eventually it comes: Why teach English? Why the Czech Republic? Why Prague? And I still don’t know. After two years I feel like I should have an answer to this question, but the truth is that I can’t remember what I was thinking when I decided to do this. I don’t even remember making the decision, a rather conspicuous gap in an otherwise solid memory.

I spent my senior year of college filling out applications for a respectable future. I applied for fellowships and scholarships and grants, although I don’t recall applying for any actual jobs. A lot of the applications were mailed to foreign addresses. Motivated by political frustration and by memories of my high school Spanish teacher, whose exhortations to travel I still hear every time I get my passport stamped, I was certain that I wanted to spend a year out of the United States. But where would I go? And what would I do?

I think the reason I can’t remember why I chose to teach English in Prague is that I never really chose it. Teaching English in Prague chose me, by being the first application with a positive return. Before I left the States, I remember worrying that I hadn’t put enough thought into it, that I’d wake up one morning in Eastern Europe wondering How did I get here? But that never happened. Prague has felt like home since the day I stepped off the plane. And teaching English as a foreign language, while not an occupation I’d like to pursue forever, has come fairly naturally to me.

There’s an episode of The Family Guy where the family must enter the witness relocation program. Upon hearing the news, one of the characters responds: 'Oh, is Europe an option? I say, I’ve always wanted to spend a year in Prague, teaching English. You know, slacking off a bit, but really getting to know myself.'

For a lot of Prague’s EFL teachers, this is an accurate assessment. A lot of expats find themselves in Prague because they don’t know where else to go. I met a boy in a bar who’d come because he was desperate to escape his hometown in West Virginia. I know another who left the States after his relationship broke down. I know several women who fled abusive relationships. But not everybody arrives here trying to flee their past. A lot of people come here because they don’t know where to find their future. Prague is a limbo haven for the undirected youth of the middle class United States.

But that’s not why I’m here. I haven’t slacked off in Prague. I spend about 24 hours a week in the classroom. Add that to the amount of time I spend planning lessons (nine separate plans per week) and grading papers (30-50 a week) and writing articles for the local newspaper (two or three every month), and I’m pulling more than 40 hours a week.

When I first arrived I liked to joke that I was postponing adulthood – teaching English in a foreign country while my friends worked nine-to-fives in the States. I haven’t made that joke in a while. Somewhere this job got hard. Somewhere it stopped being an alternative to the real world and became my world.
Living abroad is an adventure, and this experience is one that I truly appreciate. There are people who would sell a kidney to be where I am, and I try to remember that whenever my personal problems overwhelm me and threaten to dwarf my appreciation of the benefits of my being here. But I think every expat reaches a point where living abroad stops being an extended travelling vacation and starts being Life Somewhere Else. I’m not postponing adulthood in the Czech Republic; I’m starting it outside of the States.

Occasionally envious friends will remark on how glamorous my life must be, and it always takes me by surprise. They don’t appreciate what you sacrifice, sometimes, to live abroad.

Teaching English as a foreign language is not quite the glamorous profession you might imagine if you were certifiably insane. There are days when I’m absolutely whipped, emotionally and physically, and eight-thirty rolls around to find me staggering on my feet in front of eight dull-eyed, uninspired faces. I know there’s a way to reach them intellectually, but I just don’t have the reserves to get there myself.

The job has its perks, I’ll admit. After a year of teaching, lesson planning is no longer the hurdle it once was, and I love my colleagues and my students. Teaching is social, challenging and unpredictable. It improves your understanding of English grammar and human nature. It changes constantly and offers a number of opportunities to assess achievement. Most days I love it. I live in a city most of my friends have only read about. I’ve visited seven countries in the past year. I spend my afternoons in cafes reading literature between classes.

Originally scheduled to spend a year in Prague, I’ve extended my visit twice. I realized that I'd found a reasonably satisfying job that I was reasonably good at. I loved my students, I respected my colleagues and I enjoyed my work. I’d even gotten to know myself a little better. So I’m approaching my two-year anniversary and I still don’t know why I came here. But at least I know why I stayed.