A thought-provoking article by Alex Mackenzie on how CLIL really is working in practice at his school. 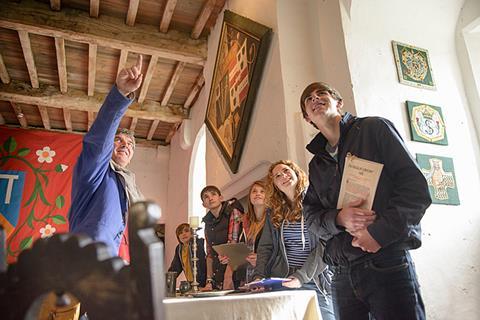 This article is written in response to the question posted in the onestopenglish Forum, 'How should CLIL work in practice?'

Anyone who is anyone in the EFL world these days is talking about CLIL. The general consensus is that it’s the way forward but there is much debate about how it’s going to work in practice and how it’s going to be integrated into EFL schools – hence topics like these in forums. There are many high-schools across the world who actively run CLIL programmes but, as yet, it hasn’t really entered the private EFL sphere.

As Academic Director in a school that offers CLIL courses and implements its principles in General English too, my aim in this paper is to give my own ideas on the matter; ideas that are working in practice as we speak. To begin with, let’s have a look at the underlying principles behind CLIL.

CLIL is sometimes called English across the curriculum which I think narrows the scope of it a little. CLIL can be a Geography lesson conducted in English but it could also be a lesson on another subject such as film, literature or even sports. The principles are the same.

Putting CLIL in to practice

CLIL is not a new concept; the name has been around since the early nineties, but people have been learning languages in this way for centuries. Migrants, economic or otherwise, have learnt this way since time began. Let’s take the example of the recent influx of eastern Europeans to the UK, many of them without any formal language education background. On a day-to-day basis, they put themselves in the position where they have to converse, deal with situations and ‘do tasks’. The contexts of these situations force them to not only use but also develop their language. Obviously, learning this way can lead to somewhat of an imbalance in their language skills in certain cases but there is no denying that it works. How many of us, as language learners, can say that we have learnt a language this way? I, for one, certainly can. It’s a natural, proven way to learn a language – the question we have to ask is how can we replicate (and improve on) this in our language schools?

I’m going to look at four different aspects of integrating CLIL into EFL classrooms: Syllabuses, In the Classroom, Teachers and Grammar. This is obviously not an exhaustive list; merely four factors I believe should be discussed.

Before I go into this I’ll give you a little background on my school, The Mackenzie School of English. We specialize in year-round education, culture and activity programmes for groups of high-school students. We run content-driven, task-based General English classes as well as CLIL lessons based on traditional school subjects. Both these modes of tuition operate using the principles of CLIL stated above.

Our General English syllabus is thematic and based around topics which appeal to teenage students, such as cinema, sport or boys and girls. All tasks in the lessons revolve around this theme and include things such as role-play, games and project work. The lessons consist of extensive integrated skills and encourage students to feel more confident about speaking English without the pressure of accuracy. The tasks and themes lead the way for the lessons; the language taught stems from them rather than the other way around.

The CLIL syllabus follows the same pattern but the topics are traditional school subjects. Again the lessons include group work, tasks and are heavily skills based. This syllabus can actually run in conjunction with General English to provide a bulkier, more academic programme. I see these lessons, in my school, as being an extension of the students’ curriculum back home, not something that replaces or works in tandem with it. Obviously, with extended CLIL programmes, this would have to be rethought.

Tasks are all important and lessons are skills based. The theme of the lesson is adhered to throughout. Students are encouraged to explore topics and their own knowledge of the world is essential. We acknowledge that learners are well-informed, creative individuals and encourage them to bring their own personalities and backgrounds into the lessons.

Very often there are end products to lessons, or a block of lessons, such as videos, magazines and reports. Our lessons are motivational, engaging and entertaining. Language is picked up and mistakes are looked at, but the themes and topics lead the way. What the students can actually produce is the language which is worked with and extended. I wouldn’t say this is level-specific; even post-beginner and elementary students have enough grasp of the language do this. Vocabulary and grammar are revised and recycled on a regular basis and students are encouraged to ‘notice’ language.

I have to say, we have been overwhelmed by the students’ feedback on the courses we have run so far. They recognize that this is a different way of learning and teaching; they find it intriguing, rewarding and fulfilling. We try our best to instil a ‘can do’ attitude in our students and I think we’re doing a pretty good job!

Obviously for the General English classes we employ enthusiastic, suitably trained EFL teachers. Our teachers are both energetic and energizing. For the CLIL courses we look for teachers who hold an EFL certificate as well as a degree related to the subject they are teaching – as EFL teachers have degrees in everything but language, it isn’t too difficult.

One potential pitfall is the way teachers are currently being trained; this article is not the place to go into details about this but many teachers, even experienced ones, can be reluctant to change their approach. To adopt this style of teaching, you have to be open-minded and confident about running a class in this manner.

We have our own in-going training programme at the school; we open teachers’ eyes to the possibilities of this type of teaching and, so far, it has been very successful.

We’re all aware of the endless debates there are about grammar – how best to teach it, can we teach it at all, etc. One thing I think we can all agree on is that focusing on single (or even two or three) grammatical structures and practising them intensively in class doesn’t really do the trick. The minute the student walks out the door they will, more than likely, be making the same mistakes. We, in the industry, have been looking at grammar in this way for years; think of it from a student’s point of view – they look at the same language time and time again. By the time a student reaches upper-intermediate level, for example, they might have studied certain forms three or four times. It’s true that learners need to know different things about the same grammar at different levels but I feel that you often reach the point where you are going through the motions – you teach grammar simply because you think you should.

CLIL is not language teaching without grammar; it’s present and it’s contextualized too. The idea that grammar can be dissected into individual chunks doesn’t really work in my opinion. Grammar, I believe, should be looked at in a more holistic sense: using contexts and functions to lead the way; using the students' own language competences as a starting block for what to teach; using grammatical awareness raising activities like in Task-Based Learning (TBL).

The future of CLIL

I’m not going to hypothesize on the future of secondary school education throughout the whole world and whether bilingual schools and tuition is the way forward but I will say that I believe CLIL has a lot to offer us as EFL teachers. It’s a methodology which presents student-centered lessons, recognizes that the students are worthwhile individuals and allows students to really communicate in a classroom environment. It is a move away from how things are presently done but, I believe, it’s a positive shift.

I very much hope you have found this paper informative and thought-provoking. It’s not intended to be a rant, sermon or bible, but is my opinion of how things should work and how we are going about it in my school.

All the best,
Alex Mackenzie

If you are a CLIL teacher and would like to find more CLiL-related resources, why not have a look at our sister site, www.onestopclil.com?

The site will be available from September 2008 and will feature an exciting range of flexible, ready-made CLIL resources for both English language teachers and subject teachers including: