Lindsay Clandfield discusses task-based grammar teaching and provides a lesson plan based on this methodology which teaches the grammar point used to. 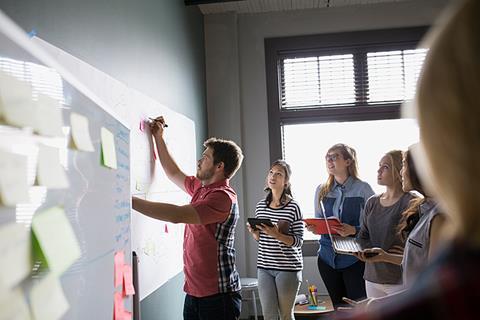 One approach to teaching language that has attracted a lot of attention over the past 25 years is a task-based approach to learning and teaching. In task-based approaches, the focus of classroom activities is on the task, and ultimately on meaning (for more on task-based teaching and learning, see the Methodology section). In Jane Willis’ flexible model for task-based learning, learners begin by carrying out a communicative task, without specific focus on form. After they have done the task, they report and discuss how they accomplished this, perhaps listening to a fluent speaker doing the same task. Only at the end is there a specific focus on features of language form.

The advantage of the task-based approach, according to its advocates, is that during the task the learners are allowed to use whatever language they want, freeing them to focus entirely on the meaning of their message. This makes it closer to a real-life communicative situation.

One danger of task-based approaches is that focus on meaning could come at the expense of focus on form. Learners become quite fluent, but their utterances are not often accurate. In addition, they develop strategies to complete the tasks quite quickly, cutting corners in their language use and form. Nevertheless, the task-based model is an attractive and liberating one, especially if you and your learners have been accustomed to a Presentation – Practice – Production (PPP) model.

The lesson plan below, which is at pre-intermediate level, follows Jane Willis’ flexible task-based learning framework to teach the grammar point used to. In this lesson, students discuss how they were different 10 years ago.

Aim: To prepare students for the task, to engage their attention.

Tell the students that you are going to show them a photo of you from 10 years ago. Ask them what they think will be different, but don’t correct them at this stage (i.e. respond to the meaning of what they say, not the form). Allow time for three or four suggestions. Then take out the photo of yourself and walk around the class, showing it to the students. Ask them what was different about you then. Put the picture up on the board and ask, ‘What else was different about my life, do you think?' Allow more comments and suggestions from the class, but don’t tell them if they are right or wrong in their guesses. Explain that they will find this out later.

Aim: For students to discuss how their life was different ten years ago.

Ask students to work in groups of three. Tell them to talk about their life ten years ago. Put the following questions on the board:

Explain that the questions are to help them start talking. Give them a time limit of 3–5 minutes to discuss this. Circulate and listen to the students doing the task, but do not correct any language at this stage.

Aim: For students to prepare an oral report of their task.

Stop the task. Tell the students that they must work together to prepare a summary of their discussion to report to the whole class. They must write notes for this summary and be prepared to report this orally to the rest of the class. Set a time limit of five minutes for them to do this.

Aim: For students to present their reports and find out who was most different ten years ago.

Aim: For students to hear a fluent English speaker doing the same task.

Aim: To raise students’ awareness about the target language.

Choose two or three sentences from your text which include the grammar used to and write them on the board. For example:

a) I used to go to heavy metal concerts.
b) I used to have long black hair.
c) I used to wear tight leather trousers.
d) I didn’t use to do my homework.

Explain the rules of form for used to:

At this point you could distribute the script of your story and ask students to find other examples of how you used used to. Point out that in English we use used to to talk about states and habits that continued for a period of time in the past.

Aim: To give the students some restricted written practice in the target language.

If you feel that your class needs some restricted practice in the grammar, ask them to write down three things that they used to do and three things that they didn’t use to do when they were children. Circulate and monitor. Ask students to check their sentences with each other, and elicit some examples to put on the board.

Aim: To give the students a chance to repeat (and hopefully improve) the task.

Ask students to work with a partner that they haven’t worked with yet during this class. Tell them to repeat the same task as they did at the beginning of the class, but that they should try to include the target structure used to into their speaking.

Once students have practised together, ask a couple to report back to the class what they talked about with their partner. Use this time to focus on accuracy, i.e. correct what they say if they make mistakes using the target language.