The language of learning across the curriculum

In this article, John Clegg talks about the importance of explicitly teaching general academic language, particularly for learners of a subject in L2.

Some years ago I was working with a maths teacher in a London secondary school who was preparing his learners (mainstream native speakers) to do the GSCE maths examination (a public examination which learners do at age 16). As part of their examination they had to carry out and report on a mathematics ‘investigation’ which involved analyzing a practical problem from a mathematical viewpoint – for example, the relation between the height and weight of pupils or comparing the readability of articles from different newspapers.

The teacher showed me some guidelines from the GCSE examiners, directed at maths teachers, which set out what they were looking for in good examination work and what the maths teachers should therefore be requiring their learners to demonstrate. This is what they said.

When students are working on the investigative coursework, teachers are advised to make the students aware of the need to:

Who knows the language of learning?

Ask yourself: if you were a maths teacher, would you be able to tell your learners how to express these thinking processes in your own language? Most would not. Even as a specialist in the language of learning, and regularly required to analyze it, I had to sit down and think hard about some of the key phrases I would use in English. For example, I might state conjectures as follows:

Let us assume that …

Even then I’m guessing. There are few reliable and easily available sources which I could turn to for an accurate account of the language which these learners needed to satisfy the examiners. A few academic works and textbooks on language for academic purposes may provide it, but incompletely, and they are hard to find. Whenever I have to analyze the language of learning, I find myself either guessing or analyzing subject textbooks. And the latter method is not very reliable because textbooks may not always explicitly contain the language one is looking for.

Subject teachers often don’t know this language. The maths teacher in question freely admitted that, even as a native speaker, he didn’t really know exactly how to express these cognitive functions in English and did not teach them. He was also not sure that it was his job to teach them. Whose job was it then? The English teacher also did not know or teach these uses of language and similarly wondered if it was her responsibility.

So here we have a situation in which the vital specialist language of learning – and crucially in this example, of public examinations – in the official medium of instruction, the first language of the teacher and most of the learners, within a key subject, is:

And, as a consequence, it is not explicitly learned by their pupils. These teachers and pupils are not alone. I would imagine that the language of learning is taught formally by subject teachers in very few schools in the UK, and that the same is true of education systems across the world.

What is general academic language?

We are, of course, talking about CALP (Cognitive Academic Language Proficiency) (Cummins 2000). This is the variety of language which people use to learn academic subjects; it is not widely used outside academic contexts (i.e. we tend not to use it round the breakfast table). But to be exact, we are talking about only one part of it. CALP is a two-part thing: it contains subject-specific language and general academic language. It’s important to distinguish these two categories of academic language use.

General academic vocabulary is also frequent: it makes up the majority of our academic language use. Corson’s (2011) ‘university word list’, for example, which counts the 150 most widely used terms in North American university discourse, contains no subject-specific words at all. Instead it contains words like: establish, consist, vary, initial, distinct and ensure.

So what is general academic language? A lot of it can be described by reference to the thinking processes we tend to use in school learning. There is a fairly short list of such processes: classifying, defining, exemplifying, hypothesizing, comparing, contrasting, predicting, generalizing, listing, adding, drawing conclusions, expressing time sequence, expressing cause and effect, summarizing. These thinking processes are expressed at different levels of language. Let us look at four levels: discourse/connectors, grammar, vocabulary and phrases. We will take the example of expressing cause and effect in history and geography.

At the level of discourse, thinking processes are often expressed by logical connectors, e.g.:

Crime was a major problem because the watchmen were incompetent.

Air masses arrive in from the Atlantic Ocean, so the West of the UK gets a lot of frontal rain.

A number of grammatical patterns express cause and effect, for example, if-sentences and gerunds/participles:

If a villein’s daughter got married, the villein paid money to the lord.

If an air mass moves over the UK, you’ll get cold dry weather.

Richard could have crushed the rumour that he had murdered them by letting people see the princes alive and well.

Sand is deposited in sheltered areas forming a beach.

Lexical items show cause and effect through the use of verbs with causal meanings. Some are explicit, e.g.:

Melting ice sheets at the poles are causing sea levels to rise.

Some are less explicit:

The electric tram allowed people to travel across the city more rapidly.

The sea breeze keeps the coast cool in summer.

Thinking processes such as expressing cause and effect are often expressed by means of phrases which have become established signals of these processes. Cause and effect markers include:

There are three main reasons for …

One consequence of this was …

And that is why …

There are lists of the language exponents of these thinking processes in Keith Kelly’s Your CLIL series on onestopenglish and on his Factworld (2011) website.

In addition to thinking processes, general academic language includes a range of key cross-curricular semantic notions which we use to express the detail of subject-specific concepts. Examples are amount, increase/decrease, structure, location, function, type. These notions are expressed in the noun, verb and adverb phrases. Here are some examples: 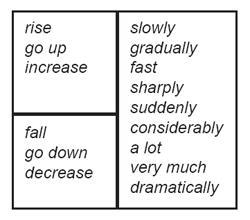 Describing increase and decrease in a graph 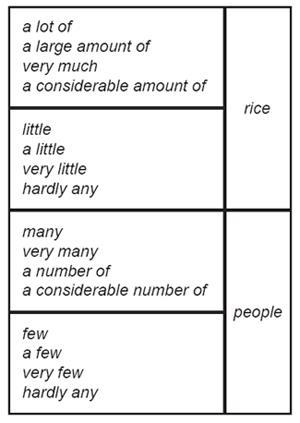 If learners working in their L1 need access to general academic language, then this is all the more true of learners studying a subject in L2. Learners using L1 might at least ‘pick the language up’ implicitly, as they go through schooling. That is after all what I think most subject teachers expect them to do: few schools attempt to teach the language of learning explicitly. However, learners using L2 as medium of instruction cannot pick it up so easily. They have their heads full just trying to deal with two big things: new subject concepts in a new language. They need this academic language to be explicitly taught by someone, either the subject teacher or an L2 teacher, if these teachers are active in the L2-medium subject programme. And, of course, it sometimes happens that L2 specialists are the ones who analyze this language, make it explicit and teach it. In the UK, for example, in inner-city schools where large numbers of learners do not speak English at home, EAL (English as an Additional Language) specialists in schools work with subject teachers, analyze the language of learning and teach it to EAL learners. In some CLIL programmes, foreign language teachers do the same. Paradoxically, subject teachers working in L1 in schools where EAL or CLIL is offered often benefit from analytical work done by L2 teachers in EAL/CLIL on codifying this subject language. It is these L2-medium specialists who generate the lists of general academic language items which L1-medium teachers can make use of.

However, it often happens, in both L1-medium and L2-medium teaching, that nobody teaches general academic language. And if learners don’t know the language of learning, they find learning itself difficult. Cognition and language go together: in order to learn academic concepts you need read about them, to hear teachers expounding them and to express them in talk and writing; and you therefore need access to the language we use when engaging in these academic language skills. The problem is partly one of responsibility and partly one of resources. Teachers do have to explicitly take and share responsibility for teaching general academic language. Parts of it, like subject-specific language, have to be taught by the subject teacher, at the point of need, when teaching the subject. And it should be acknowledged that it is sometimes difficult to say where subject-specific language ends and where general academic language begins. On the other hand, some aspects of general academic language (such as the idea of hypothesis embedded in modal verbs, or the whole class of logical connectors) do belong more to ‘language’ than to ‘subject’. Teachers of the majority first language or of the second or foreign language are probably best placed to teach them. In good schools, this sharing of responsibility will be planned and coordinated by explicit whole-school language policy.

To do this, all these teachers need academic language resources. They cannot be expected to spend hours analyzing the language of learning for themselves, each reinventing the wheel. We need simple inventories of the language of school learning, perhaps combined with simple activities for teaching it. A codifying job needs to be done, describing the language of thinking processes and semantic notions which recur regularly across the curriculum. It would not be difficult: it is partly available already in various sources – the Your CLIL resources on onestopenglish are a case in point – and these need to be brought together. It could be done separately from subject-specific teaching as a general resource for teachers – a cross-curricular language compendium. Publishers could also connect it to the requirements of specific subject textbooks by including it in teacher resource material accompanying the book. Finally it needs to be brought into lessons at the point of need: learners learning subjects in L2-medium/CLIL programmes need this language to be made explicitly available on the textbook page where they are asked to use it to learn a specific concept. And although it is not common, the same is valid for learners working in their L1. The London pupils writing reports on their investigations for maths GCSE should have had simple lists of phrases available which enable them to express the mathematics thinking processes which their examiners wanted them to demonstrate.

It is not a difficult thing to do. Tourist phrase books have done it for social language functions for over a century. We now need it to guide learners through the language of schooling.