Onestopenglish's resident exams guru, Russell Whitehead, talks about the lure of teaching in London, the importance of comic timing, and gives an insight into his life as a freelance writer and consultant. 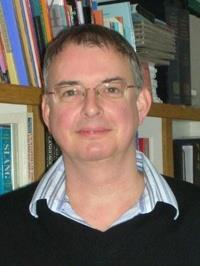 It took me three years to get from school to university and when I graduated (English Literature at Oxford) in 1985, I had already identified EFL as a permanent Plan B in life, having spent a while ‘teaching’ in Brazil. For the next decade, it weaved in and out of my not-career, along with other kinds of teaching and writing and performing poetry and stand-up comedy.

Gradually, I ditched expectations of paying the rent long term from the more creative end of things and formed a kind of Faustian pact to be serious about EFL, ESOL and other similar terms. As well as fixing on teaching only EFL, this involved doing a PGCE and quite a lot of examining for UCLES (as was), while setting up self-access facilities for the Frances King School of English branches. I then did an MA in Applied Linguistics (London, 1997-9) and even embarked on further research (effects of computerization on the assessment of writing).

In 1998 I got an offer I couldn’t refuse (see below) and finally managed to rid myself of the curse of employment (though the Faustian thing of course continues).

So I’ve had ten years of freelance existence. My working time is spent mostly writing learning and teaching materials and tests (lots of tests) for a variety of publishers and test providers, and most of what I write is destined for the web, although my name’s on ten books. I also do various things for Cambridge Assessment (as is), such as chairing exam papers, and consultancy for universities and publishers.

Were you to ask me what I expect to be doing ten years from now, I’d been unable to answer definitely, although I might have moved my expertise in assessment into consultancy outside EFL, ESOL and other similar terms.

How did you start your ELT writing career?

I started marking CAE Writing papers for UCLES (as was) in 1993, became a team leader for that and thus was asked to try writing some of the tasks. This led to writing tasks (or ‘items’ as they are known) for other exams, including the then quite new BEC. I did some reporting for Longman, then some parts of the revised Focus on CAE. One day someone called Sarah Gumbrell called and asked to meet. She needed two courses written, as books for Direct English (owned at that time by Longman), based on BEC, for a fee that had me clutching my chair while pretending to look normal. It was also for a deadline that meant I resigned my job. Ironically, those books have never been published, but they did get me started. My first published books, BEC Practice Tests, were co-authored with Vanessa Jakeman in a deal brokered by Mark Harrison for OUP.

Although far-flung locations spring to mind, I realize those places aren’t necessarily so interesting for the people who live there all the time. London, however, has always been an extraordinary mixed up meeting place of all sorts of people and cultures, and it seems very appropriate for people to learn their global English in a multinational situation, combining language with intercultural insights. (The day the first Gulf War started, my class contained an Iranian, an Iraqi and a Kuwaiti, for example. ‘Free Kuwait!’ the Kuwaiti kept shouting during breaks. ‘Yes, with every coursebook you buy,’ muttered the Iranian.)

For the former, perhaps the teacher training I did with the Language Centre at the School of Oriental and African Studies, London University. Eun Bang and I evolved a needs-driven programme of teacher development for all the teachers. It meant running sessions on teaching grammar, say, with the teachers of Mandarin, Urdu, Turkish, etc, and we all learnt about what grammar, in this case, really was by having to think of it across so many languages. (Most books on teaching grammar don’t work quite so well when you try and apply their wisdom to other languages.) We also set up Zulu lessons, so we all learnt Zulu for an hour, and then had an hour in which we discussed what insights we gained from the process.

For the latter, I admire my own perseverance in knocking out a column in the IATEFL Learner Autonomy (as is) Newsletter for the last ten years, and I also think that the IELTS Essentials Practice Tests book I did with my mate Mark Harrison is high quality, clear, detailed and helpful to both students and teachers.

It was all rather embarrassing, really, a permanent minefield of cross-cultural booby traps; there are just too many to recount. Gazing more or less at random down memory lane, I see me expressing my irritation to an Indian gentleman for rudely shaking his head throughout my detailed answer to his detailed question in a Proficiency preparation class and then being gently told by another student that shaking the head in India is like nodding it in England. I also see many incidents of varying success in holding back giggles while students announced their names which, while of course quite normal to them, were homophones of quite dreadfully obscene things in English.

(Having been a stand-up comedian, I do know that the secret of comedy is timing.)

Man walks into a bar.

There are two sorts of author, I think.

The first is someone who is published and has writing materials of one or more kinds as part of the portfolio of activities they do. The money either doesn’t matter that much or is at any rate a minority of their overall income.

The second is someone who writes most or all of the time. The money is what it’s all about.

In some ways, the first is quite easy. Look around you – there’s absolutely masses of text, and it’s all been written, by people (to date). If you want (a lot) to be one of those people, then follow the various and excellent advice that previous authors of the month have offered you, based on their valuable and practical experience. I really can’t think of anything to add to their wisdom.

What I think hasn’t been made quite so clear yet is the issue of whether you want (a lot) to move from the first type to the second. You have to go through the first to get to the second anyway, of course. There are quite a lot of the first type and not very many of the second. It’s a treacherous world. You could spend years writing a coursebook that never really sells, for example.

There’s no point in trying unless you’re really hungry for it. Are you? Most teachers thrive on the buzz of the classroom, trainers on the achievements of the trainees, and so on.

I work at home, alone, four days out of five on average. I designed my own office, and the small garden it looks out onto. I wander out, I chat to the fish in the little pond. I picture classes and training rooms and conference rooms and audiences in my head and write for them – absolutely distant learning, you might say – or I produce tests or parts of tests or reports for people about tests. It suits me. Would it suit you? Would you manage your deadlines, deliver a regular output, several thousand words, day in, day out, in an empty house?

The argument works the same in other contexts, I expect. You could be a chef in a kitchen with plenty of colleagues, and customers to wander out and chat to, who has also written a book of recipes – or perhaps got a series of them on a website called something like One Stop Fish. Or you could be someone working mostly alone in a specialist kitchen, experimenting with ideas for recipes, refining them, and writing them in several books, several series on several websites. I know it’s not a very good analogy, but I hope it makes the point.

A big problem is that we’ve only got so much time (adult, qualified, working time), and it takes rather a lot of time to learn to do something complicated well. This limits the number of things you can be really good at. The world of education needs, apart from learners, people to teach, people to train the teachers, people to administrate, develop and market schools and courses and to liaise with organizations and government ministries for funding and accreditation. It also needs people to create processes of measurement and encouragement and enablement. It needs materials, resources, blackboards, chalk, websites, books. It needs philosophies, research programmes, mavericks, critics. We all have to find the bits we like and can do well, and to stick with them.

Well, my main tip, I think, is to check the balance of your agathism and zemblanity.