Onestopenglish's fabulous Phonics author, Rachel Finnie, tells us about her life – from her beginnings on the wrong side of Birmingham to the joys of teaching and writing in Greece. 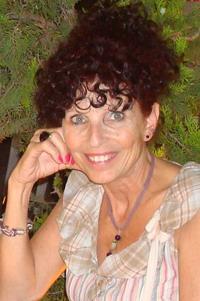 Here are a few biographical details about me: I was born on the wrong side of Birmingham, had a somewhat insalubrious upbringing and spent seven years attending a posh grammar school where I felt like a fish out of water. Getting away to Nottingham University was a happy release. I studied Social Administration because I couldn’t think of anything else that sounded interesting. I had no notions of becoming a teacher at that time, having been deterred by the frosty, powdery, plum-mouthed ladies of King Edward’s Grammar School for Girls. After graduation, fate (and love) led me to North Wales, where I got a job as a generic social worker (which, at first, I thought was a ‘genetic’ social worker, so I had high hopes of becoming some sort of medical/forensic expert; sadly that was not to be). Then, after seventeen years, a series of events led my husband, myself and our two small boys to move in 1994 to a new life in a tiny Greek mountain village. And that’s where I have stayed, though I swapped the village for the city – a wise move when you are the mother of two teenage boys.

On good days: enthusiastic, determined, optimistic, organized, funny (not necessarily in that order).
On bad days when everyone is hassling me for work 'NOW': tired, grumpy, impatient, impolite, dangerous!

I came to Greece with no ELT experience, having left a long career in Social Services. But, before long, I was teaching every day of the week and loving it. However, I knew that what I really wanted to do was write and eventually I persuaded Michigan Exam expert, Diane Piniaris, to let me write a Companion with her. Now, Companions aren't the most exciting of books to author, but I was over the moon at having the opportunity to actually be a writer (of sorts). After that I was hooked, and I was put in touch with another now-famous author, Jeanne Perrett. Jeanne gave me the chance to write a couple of Workbooks, and that was it. There was something quite magical in creating manuscript pages ... I was sure I wanted to be involved in producing books one way or another. I vividly recall the first time I ever saw a book with my name on the spine on a shelf in a city bookshop. I kept pointing to it and telling the proprietor, 'That's me! It's me!' I doubt she had any idea at all what I was on about, in fact. Gradually, my teaching hours decreased as my writing and, subsequently, editing hours started to increase. Nowadays, I spend all my time either writing, editing or project managing (and, on a bad day, all three). I live in Volos, the gateway to the glorious region of Pelion, and I can't think of a nicer place to spend hour after hour in front of a computer screen!

I've carried out lessons on the beach, lessons in tavernas, lessons in tiny village cottages and lessons in private language schools. They've all been interesting in their own way – how could teaching enquiring minds not be interesting? I also spent a couple of years teaching English to a remarkable lady of 76. We had our lessons in her gorgeous sea-front apartment and, quite honestly, I'd have gone for two hours twice a week whether she'd paid me or not. But I’m in no hurry at all to go back to teach at the school where the owner refused to let me use her private toilet. She was a formidable lady who decided the teachers in her school didn't need a break (not one) between lessons, and had us teaching from 1:30 in the afternoon until 9:45 in the evening, literally walking out of one classroom and into the next one (or if you were lucky, you stayed where you were and the kids moved). It lessened the impact of the toilet embargo – there was no time to go anyway!

This is the hardest question of all to answer. Naturally, exam successes were great. But every time a child understood something, every time a student used English to express themselves, every time kids learned new words and structure ... they were all proud moment for the learners, so they were proud moments for me too.

Sorry – can’t think of one!

One day, Frank decided he needed a pet. He’d seen people with cats and dogs and he didn’t fancy that, but he did want some sort of a pet. So off he went to the pet shop to seek the advice of the owner. ‘I’ve got just the thing for you, Frank,’ said the pet shop owner, ‘here you are.’ And he produced a box. ‘What is it?’ asked Frank. ‘It’s a centipede,’ said the owner, proudly. ‘They make great pets.’ Frank wasn’t crazy about the idea but the owner convinced him and off he went with the box under his arm. Frank got home and set the box down in the middle of the living room floor. He sat and looked at it ... for hours. Nothing happened. ‘Huh, some pet, this is,’ thought Frank, and he decided to go out. Then he had the idea of inviting the centipede to join him. ‘I’m going out. Do you want to come?’ asked Frank. No response from the box. ‘This is a load of rubbish,’ thought Frank. ‘The stupid centipede doesn’t do anything!’ Then he repeated, ‘I’m going out. Do you want to come?’ – this time a little more crossly. Still nothing from the box. ‘One last chance,’ thought Frank, and he shouted, ‘I’m going out ... do you want to come?’ Just then the lid of the box lifted and the centipede popped his head out. ‘Hold on a minute,’ he said, ‘I’m putting my shoes on!’

Tip 1 – really, really want to do it.
Tip 2 – don’t expect to get rich.
Tip 3 – be prepared to pester publishing companies ... a lot.
Tip 4 – If you do get any chances to write, READ THE BRIEF. I’m always amazed at how many writers don’t do this. As writers, our job is essentially to do as we are told – and the brief is what tells us!
Tip 5 – keep up to date with what’s going on in the ELT world and in education in particular.
Tip 6 – enjoy it!