One of onestopenglish's longest-standing authors, Lindsay Clandfield, talks to us about his life and work, offering some great tips on how to become a top ELT author. 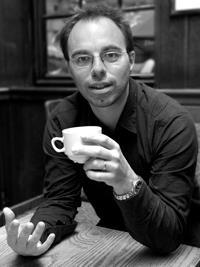 So, Lindsay, tell us a little bit about yourself…

Well, I’m a British born Canadian. By that I mean I was born in England, but grew up in Canada. I feel (and sound) more Canadian. I am currently based in southern Spain, in a town called Elche near the Mediterranean coast. I live there with my wife and two sons. I spend most of my time writing now, I guess, but I also do teacher training on a distance course with Oxford TEFL and courses with The Consultants-E. I still teach here too – often short courses. At the moment I’m just finishing a course with absolute beginners: a group of secondary school teachers who want to learn a little bit of English. Beginner is one of my favourite levels to teach – it’s demanding and frustrating at times but the payoff is visible much quicker.

Creative, hard-working, friendly and… err… easily-distracted. That’s four words, or could we say six since two are compounds…? I can’t think of any more.

Ha! I knew you’d ask that. The first thing I ever wrote that was published was for a magazine called It’s for Teachers. It was a series of activities on the UN Year of the Refugee. But very shortly after that I got my first break with a big publisher through onestopenglish. It was in 2001. I wrote in to the Lesson Share competition and won. I wrote in again, and won again. This continued until I was given a regular spot, writing the American-English vocabulary lessons and then the Speaking lessons. My wife and I still remember the huge excitement of receiving the first cheque from onestopenglish, for 75 pounds. We went out and bought a VCR player, which we still have!

Writing for onestopenglish eventually led to other things with Macmillan. I wrote some resource material for courses in Latin America, and then some material for the course Inside Out. Finally, I was given an opportunity to be a part of a writing team on Straightforward, a new international course. That was the big break, I suppose. That book is now selling in more than 34 countries.

I should add here that I’ve continued writing for onestopenglish. I think I’ve published something on the site almost every month for the past six years!

What’s the most interesting place you’ve ever taught in?

There are two possible answers to that. I should be most proud of going to Buckingham Palace to meet the Duke of Edinburgh and receive an award for a book I’d written. And, although I’m not fanatically royalist or anything, it was quite an honour.

But I’m also proud of student teachers I’ve worked with who go on to write themselves or realize a dream they’ve had. For example, a couple of the writers on onestopenglish were students of mine on a teaching diploma course (I won’t name names) and I know I’ve helped at least one person get their book published. That’s something to be proud of, I think. Finally, I always feel most proud when a class goes really well. And I feel awful when a class goes badly.

Well, I had a class of teenagers a year ago. I made some comment or reference to the X-Files and Nirvana (I can’t remember how or why now) and got blank stares. I explained again and one of the students told me icily that she was four years old when those things were popular. I felt old all of a sudden.

I don’t know if that counts as embarrassing. I haven’t had any of those 'teaching with my flies undone' moments, or 'teaching in slippers, or pyjamas' either. But I have dreamt them! I think the onestopenglish Teacher anecdotes section will have far better examples than my feeble one!

I like the following one-liner, which I use quite a bit when I give talks to teachers: 'Teachers are people who used to like children.' It’s horribly cynical of course. I love kids.

What are your tips for becoming a top ELT author?

First of all, I don’t think I’m a top ELT author. There are lots of great authors in our field, and I’ve been very lucky to meet many of them. Here are some tips though that I’ve picked up so far.

Many people who want to be writers, and who can sometimes actually write, never really get anywhere because they just don’t get it done. They don’t discipline themselves for writing, or they take far too long. You need to be able to meet deadlines, no matter how great your material is. Onestopenglish was a great help for me in that respect, training me to meet deadlines.

2.  Be aware of the bigger picture

I think that, to be a good writer, you should read a lot. You also need to know what’s out there, what’s being tried. There’s nothing more embarrassing than hearing someone go on about a big new idea that 'no one has tried', or saying 'coursebooks never do this' when in fact people HAVE tried it and coursebooks DO do it.

Most of the time when you’re writing for ELT you’ll be following a brief (a series of instructions) from a publisher. If you can’t follow this then there is less chance that you will be asked to do something else. Some authors get very precious about their work too, and just can’t take any feedback or criticism from an editor or a reader. Not a very good attitude. Finally, if you do get something published then don’t lord it over your colleagues. Nobody likes a smart alec.

There are some millionaire ELT writers, it’s true. But that is less and less the case these days. The competition is quite fierce and there is a lot of material on the market. In a way, this gives more opportunities for new writers but you probably won’t be able to give up your day job just yet. Most ELT writers have to combine it with a full time job. I was working two jobs and writing for five years before I was able to devote myself to it full time. It’s important to keep some teaching hours anyway, as it’s very easy to lose touch with the realities of the classroom. And that shows in the writing.

Like anything else, practice is vital. If you want to be a writer, then you have to practice the writing muscle. The more you write, the easier it will be for you. Good luck!