In her seventh diary entry, Shiriin Barakzai provides us with some entertaining illustrations of her experiences teaching English in Bhutan, including the challenge of explaining central heating in a culture where it hardly exists! 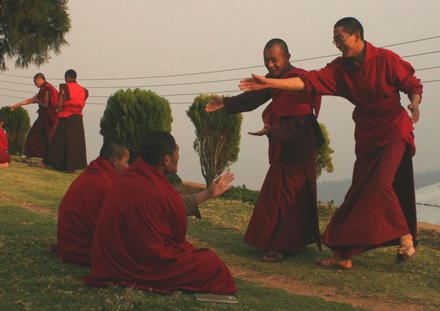 The monks have returned to the monastery and now the senior class is smaller because six of them have finished their final year and gone to the University of Religious Education at Tango Goenpa in the Thimphu valley. In many ways, this makes the lessons easier. However, because a group of new students have joined the junior class, it has become almost impossible to teach them. There is such a wide range of levels in the class that while some of the students aren't yet familiar with the alphabet, others are already able to construct basic sentences. I have not even tried teaching this group, as my lack of Dzongkha would make it impossible.

Lessons are back to a normal schedule after a short interruption for Punakha tsechu (festival). In our last class, we completed one of the exercises from onestopenglish practising the use of 's'. We then read through a newspaper article about a surgeon who performed emergency surgery in the Congo using instructions sent to his mobile phone from the UK. Although most of the vocabulary did not pose a problem, the concepts referred to were challenging to explain and we even used our world map to find the Congo and Rwanda!

In the smaller group, everyone participates and some of the students that never used to speak are starting to get more involved. This makes for fun lessons, as all of the students are very interested and the conversation flows in many different directions. I’ve even had a specific request to do letter writing in our next class.

Recently, between English sessions, I spent some time watching the monks' debating class. As part of monastic philosophical education, the monks have to learn to explain and justify a point of view or opinion clearly, and to convince others through logical and factual thought. The party arguing for the ‘motion’ stands and claps his hands as he delivers each point. The other party sits and listens, countering the argument when it is poorly presented.

I have also spent some time helping a friend to prepare for an IELTS test and I realized that English is extremely challenging at every level for the students here, because of the concepts that don’t exist in this culture. We used practice test books and completed a speaking exercise to work on phrases that are common here, but not actually grammatically correct. The practice test involved a discussion about young people taking a gap year between school and university. This caused total confusion, as my friend had no idea what the conversation was supposed to be about. So although we stuck to the practice duration, the discussion just ground to a halt. Even when I explained it to him afterwards, the idea of taking time off to gain life and work experience just doesn’t make any sense in a country where so many people have to drop out of education due to a lack of funds.

My friend also had to complete an academic writing exercise based on a diagram of a central heating system. Central heating doesn’t exist here, except in three top local hotels, so although he had a good guess based on the drawing, he was still totally confused. He couldn't understand how the circulating water in the system was heated, as he misunderstood the label ‘gas’ on the boiler to mean that there was gas circulating in the system. So, although his sentence structure was fine, the text he wrote made no sense - he had both gas and water running through the pipe work! I explained it to him afterwards, but it seemed pointless, because he will probably never come across central heating.

Lebeh Tshewang has received some more books by post from a lady who visited Nalanda last year and from an American contact of mine. But with the library construction not yet really underway due to a funding glitch, the books are still lying in his quarters unread. There are some really helpful books on grammar, idioms, spelling, etc., but there is also some much more difficult stuff: books on the history of the world, a compendium of Shakespeare and lots of fiction. The monks find it difficult to read fiction because the idea of made-up names, places or words, as in The Hobbit, Star Wars, etc., contradicts their religious scriptures.

It's tourist season again and I’m hoping more guests will come up to visit and chat to the monks, although I find it tiring to keep checking that the hotels have put our posters up. Lebeh has recognized the benefit of outsiders coming to speak to the monks and has moved the evening classes to an earlier time slot to make them more convenient for the tourists.

Last weekend, we were ‘hosted’ by Khenpo Tshewangs’s deputy for pre-class tea. He has been a monk since he was seven years old and has never attended a ‘normal' school. He’s probably only in his early 20s, but pre-primary didn't exist when he started his education. He explained that he can see how important English is here, as it is used on Bhutan’s currency, on application forms for the bank, for electricity, for mobile phone registrations and on many public notices. As I mentioned last month, although Dzongkha is the official language of Bhutan, it is mostly only used in the west or in government offices. The rest of the country relies on English as a written language, although Sanskrit and Choekey (Tibetan) are used for monastic education and scripture referencing.

My time in Bhutan is coming to an end and although it’s been fun for me to work with the monks, I haven't really developed a sustainable approach to teaching English. Ideally, teachers should be based closer to the monastery so that they can come here on a regular basis and spend time with the monks who are teaching English, rather than teaching classes themselves. I can only hope that some teachers that fit this profile will soon be finding their way to the monastery!