Our pronunciation and Ask the Experts author, Jonathan Marks, on teaching English, writing and telling jokes, with a major get-out clause for our readers before the joke itself. Be warned! 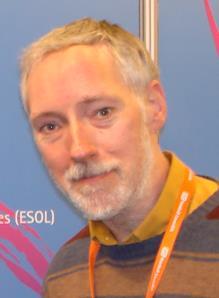 Tell us a little bit about yourself…

I always wanted to be a teacher, from as far back as I can remember, but my ambitions to be a primary teacher in Britain failed the reality test. Fortunately I found out that there was something called teaching English as a foreign language to adults, and that seemed to suit me much better. And during a summer spent teaching in England, I met some other teachers who told me about a four-week teacher-training course you could do, where you learned, for example, to hold up an empty coffee jar to illustrate the meaning of 'There isn't any coffee left'. Well, needless to say, I signed up for it as soon as I could. It was the distant ancestor of what's now known as the CELTA course. The month when I did it was the last month before the course fee went up from £90 to £110, and it was certainly the best investment I've ever made.

Since then I've worked in Britain, Germany, Sweden and Poland, where I've been based for the last seventeen years. A particularly significant and formative period for me was the 1980s, when International House Hastings provided me with exceptional opportunities for development as a teacher and teacher-trainer. That period also marked the beginning of my association with IATEFL, which has always been, and still is, important to me as an environment for keeping in touch with the wider world of ELT.

I wouldn't call it a career, really - rather just a series of opportunities that have arisen. I seem to remember years of evenings spent in pubs in Hastings with Tim Bowen, and conversations like this:

Eventually, though, we were galvanized into action by two specific publishing projects, which led to two books for teachers, The Pronunciation Book and Inside Teaching, both of which are now, sadly, defunct.

A bit later, in Germany, I was approached to join a team of people writing a coursebook, and said yes, not fully realizing what I was letting myself in for - but it brought lots of satisfaction, as well as a bit of angst sometimes. The book was (and still is!) called Bridges.

More recently, in Poland, I've been involved in various capacities in three Polish-English dictionary projects, which have brought me a new unexpected interest.

I wrote English Pronunciation in Use Elementary (CUP 2007), which I suppose is a product of two long-standing interests: teaching pronunciation, and teaching low levels.

Apart from that, I've written various bits and pieces for onestopenglish and for the Macmillan English Dictionary webzine.

Whatever it was, I've forgotten it - or suppressed it? - and although it would be embarrassing now if I could recall it, it probably wasn't at the time. (Does this qualify as an answer to the question?) I'm thinking of the very first job I had (see above) when I taught without any training or preparation whatsoever. It would be interesting to climb into a time machine and go back and sit in on some of those lessons - but perhaps better not to, after all?

Hard to say because, whatever it is, or was, I've forgotten it - ages ago, probably. The thing is, I've known people who've got such a well-stocked joke department in their heads that they can entertain or bore people with them for hours on end without repeating themselves. I haven't got this facility at all, and the number of jokes I could tell you now might reach about twenty, at a pinch - which is a pity, really, because I know I've heard loads of jokes that have not just entertained me but given me insights into language and life and all sorts of other things.

So, after that lengthy prologue, here's a feeble answer to the question - one of the very few jokes that I've managed to retain, for some reason. Before I tell you, though, I'll give you a moment to scale down your expectations ... In fact, if you're really a connoisseur of humour, you might like to consider whether it's really worth reading on, or whether you might make better use of your time by clicking on some of the many truly useful resources on this website ... Right. If there's anybody still with me, there are a couple of other preliminaries I need to draw your attention to.

First, this joke starts with, 'A bloke goes into a pub.' Now, there are thousands of jokes that start like this, and if you're fed up of them, you now have one final chance to exit, and read something more edifying instead. Secondly, if you're really sure you want to stay with me, you have to be prepared to read the punch-line aloud (maybe you could find a willing victim to read it to?) or at least to hear it inside your own head, otherwise it won't work. And be warned: the punch-line comes pretty soon. This isn't one of those jokes that involve long, involved narrative or complicated lengthy dialogue. So, if you're still there ...

A bloke goes into a pub ... So far, so good. But what's next? Hmm, let me think. It'd be pretty embarrassing if I couldn't remember it, wouldn't it, after all this introductory stuff? Ah, yes. A bloke goes into a pub with a newt on his shoulder - yes, that's it. If you don't like it so far, don't worry; there isn't much more. The barman greets him with: "Good evening, sir. What can I get you?" The customer replies: "A pint of bitter, please" - and, pointing to the newt - "and a gin and tonic for Tiny", whereupon the barman responds: "Certainly, sir, but why do you call him Tiny?", and the man answers: "Because he's my newt."

That's it. No, there isn't any more. That was the punch-line. I told you - you've got to hear it. If you don't get it, you can send me a request for an explanation, together with a signed undertaking to buy me a pint of bitter if and when the occasion presents itself.