Author of our fabulous series Fun with grammar, Jill Hadfield, tells us about her globetrotting EFL career - from Bordeaux to Madagascar, from Tibet to the Antipodes - and offers some useful tips for aspiring writers. 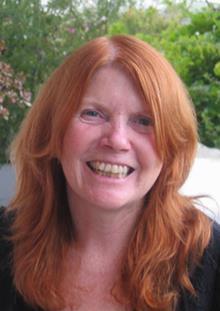 Tell us about yourself ...

I didn’t mean to become an ELT teacher (actually I’ve yet to find an ELT professional who did!). I started out on the road to academia, teaching in a French university and writing a thesis (on the novels of Saul Bellow) and gradually discovered that I really enjoyed teaching EFL. It was a very exciting time to be in France as Alan Maley was director of the British Council and there were lots of new ideas flying around. Bliss was it in that dawn to be alive, etc. My colleague Gill Porter Ladousse organized a teachers’ group called UPLEGGES. It actually stood for something very serious: Union Pedagogique pour L’Enseignement de… something or other. But 'Up Leggies' sounded like a riotous knees-up and much more fun – which indeed it was: lots of inspiring workshops with the inevitable leisurely four-course French lunch in the middle – which meant that the second half of the workshop was even more fun than the first!

After three years in Bordeaux, my husband Charlie and I went to London University Institute of Education where he did an MA and I did a PGCE in TEFL. Again, that was an exciting time to be there, with Henry Widdowson and Chris Brumfit as tutors. From there Charlie got a job at South Devon College, where yet again he was fortunate to be working with a lot of inspiring and creative colleagues, with Rod Bolitho as DoS. I was less enchanted at the beginning of my time there as I was jobless – I call it my ‘embittered housewife phase’ – but it is proof to me that ostensibly difficult times can be unexpectedly fruitful: out of that boredom and frustration I started writing the communication games! South Devon were good to us for several years and we had sabbatical leave for various contracts to do development work: setting up a centre in China to teach postgraduate agricultural scientists who wanted to do PhDs in the US or Britain, developing and teaching an undergraduate syllabus at the University of Tibet and setting up resource centres in remote areas in Madagascar and training a team of animateurs pedagogogiques to staff them.

Now we are in Auckland, New Zealand where Charlie is director of teacher training at ELA, University of Auckland and I am a principal lecturer at Unitec where I teach on a BA in English and Cultural Studies and teacher-train on CELTA and other NZ teaching qualifications. We came on a two-year contract and have been here six years. We didn’t mean to stay so long … but here we are, still loving it!

How would you describe yourself?

Still wondering when I’ll grow up.

At Bordeaux University we ran a writing club for students called Graffiti. Charlie put some of the ideas into his MA dissertation on Writing and his supervisor Anita Pincas invited us to collaborate on a series of books with her (Writing In English, published by Macmillan). Subsequently Harrap asked me to do samples for a coursebook. They never went ahead with the course but my samples had included a game for each unit and they asked if I could do a book of games. I had very precise demands for the production of the book – A4, spiral bound so it could lie flat on a photocopier, and with a photocopy permit. I had a very creative editor who – to my surprise – agreed, and that is how the Communication Games series (and all the other subsequent photocopiable series) was born.

What's the most interesting place you’ve ever worked in?

China, emerging from Cultural Revolution days, was very interesting, and so was Madagascar, but I think the most wonderful place we’ve worked has to be Tibet. We were very privileged to be the first foreigners to work there just after Tibet was opened in 1986. The British Council contract advertised a job for a ‘hardy married teaching couple‘ – and we certainly had to be hardy: in the winter it was -8 inside our flat, thick ice inside the windows, taps, shower, toilet and sink wastepipe frozen solid so we had to get water from the campus pump to wash and wash up, and there was a 200m walk to the latrines. (-20 outside …) I washed my hair once and it froze. In the unheated classrooms, I had to get the students up every 5-10 minutes to do some exercises and I wore so many layers of clothes that I was so fat I could hardly reach my hand up to write on the board. But we fell in love with so many things about the country – the fascinating culture, the awe-inspiring scenery, and most of all the friendliness, cheerfulness, generosity and unquenchable spirit of the people. I dream of going back.

In my writing career I feel pleased that I have had some initiatives described as ‘ground-breaking’ – the Classroom Dynamics book and the photocopiable Games series, both of which were ‘firsts’.  But I think what makes me feel proud is when I am conscious that I have helped someone in some way – every time someone tells me that materials I have written are useful to them or have been fun, I get a happy glow. In this connection, I am most proud of the materials Charlie and I have written and the series we started (Oxford Basics) aimed at helping what Alan Maley calls ‘the silent majority of the world’s teachers‘ – those who haw few or no resources.

The series stemmed from the teaching situation in Madagascar where we did not see a single school with any books at all. We started a magazine with ideas for teachers (called IDEAS) and one of the most amazing moments of my career – humbling more than proud-making – was when Charlie and I, sitting at a hotel bar in the humid evening heat of an East coast port town, were joined by a French aid worker who had just been visiting some schools so remote that he had to walk for three days to get there. When we introduced ourselves he said, 'Oh, I have a message for you!' The English teacher at one of the schools had come running out and asked if he knew us: 'If you meet them, tell them I have IDEAS 1, 2 and 5 but not 3 or 4!' Of course, the first thing we did when we got back was to send the missing copies!

Outside my EFL career, my proudest achievement is a scheme I set up in Madagascar to enable streetkids to go to school (www.moneyformadagascar.org) – to date we have sent getting on for 2000 kids to primary school.

What is your most embarrassing teaching moment?

Perhaps a team of us arriving in Algeria, having been briefed that we were to give a one-week course for secondary school teachers. On meeting Ministry of Education officials the first evening, we found that the course was in fact for teacher-trainers! Happily the next day was Friday, so we had at least a little time to revamp the course.

Most embarrassing, heartsink classroom moment: setting up a role play. Students in pairs prepared a plan for a trip round the world, then I set up chairs as if in a train compartment, and students had to sit in the ‘train’ and explain their plans to each other. To my horror, I saw the two classroom lotharios (real wide guys) sit down opposite an attractive (and well endowed) girl, who just happened to be wearing a tight-fitting T-shirt  emblazoned with … a map of the world.

What is your favourite joke?

What are your tips for becoming an EFL author?

I fell into writing by accident rather than design, so haven’t got any particular strategies. I suppose: