What is ‘conversation’ and how can teachers improve students’ conversation skills?  This article, by Kateryna Protsenko, looks at the different ways to improve this skill.

In general, speaking can serve two functions – either exchanging information (transactional), or establishing and maintaining social relations (interactional) (McCarthy, 1991). While it’s sometimes possible to distinguish between those (e.g. a lecture is definitely a transactional type of speaking), it can sometimes be difficult to define the type of interaction, e.g. a chat between two friends will be interactional because it’s done to maintain the relationship, but it will also involve some transactional speaking, e.g. exchanging news, explaining a recipe etc. (Thornbury and Slade, 2006).

Speaking will also involve some declarative and procedural knowledge. The former is knowledge of the facts, and is quite often more relevant to transactional speaking, however, it should not be neglected completely. The latter is knowledge about how to do things, in our case, how to have a conversation. This involves (but is not limited to) the following:

I will share some steps which have worked for me in helping learners have a fluent conversation in English, which sometimes makes learners even better at having conversations in their L1.

Exposure to various samples of talk

For a good cook, it’s fairly easy to make a peach pie if they have tried apple pies, plum pies etc. However, if this cook has never tried cinnamon buns, chances are very slim that they will be able to come up with a recipe for cinnamon buns – it’s not an easy everyday thing and one needs to know how buns are made, how to work with yeast, etc. It’s the same with interactional speaking – some things are very easy to experiment with and do. For instance, overall structuring happens intuitively – we all use some sort of opening, closing, etc. Some other things are more difficult and need to be heard so that they come into the scope of competence. Turn taking, for example, is a rather complex process, and learners need to be exposed to it before they can start experimenting with it.

In most classrooms, this is not a problem as modern course books offer a variety of text types we can expose our students to. However, it could be useful to have a small checklist in which we note down the types of texts we have listened to with our students, e.g., a radio interview, a chat between two friends, a chat among four friends, a formal conversation with a boss etc., and then after a while see if there is a good enough variety, or if we need to bring some additional materials to give more variety. This way we can make sure our students have heard a lot of different types of conversations and should be able to recognize them, and the conventions of those conversations.

We don’t learn English by exposure alone - simply listening to it. When listening to various text types, we need to make sure students understand what exactly they need to take away from it. So, after we’ve done all the listening tasks, we could set up an additional task, e.g. we could listen to a dialogue once again and get the students to pay attention to the intonation at the end of a turn. Students could work with a script during listening, and could mark the intonation at the end of every single completed turn (we would need to make sure we first clarify which turns are completed).

With time and with enough exposure students become more autonomous - I just love it when students get to this stage. If we have been exposing our students to various texts and have been using listening for the purpose of speaking, students get into the habit and start asking for it, so occasionally in a listening lesson my students will ask to listen to a text once again to clarify what is happening there from the speaker’s perspective.

The development of learner autonomy and interest in the speaking sub skills is only possible if learners are aware of what we are doing and why. This is why when working with a listening sequence, for example, I tell my learners very explicitly that we are going to hear the same text for the third / fourth etc. time, but the focus will be on what the speaker does rather than on understanding the text, and that we are doing this so that we can learn something nice from this listening which will develop our speaking skills.

Making notes, highlighting, noting down examples etc., help learners really see what happens in a dialogue. For instance, if the listening we are working on is full of repair strategies, I would ask my learners to underline those strategies in the dialogue or note down the exact exclamations/utterances/strategies they hear (e.g. Sorry, I missed that; a partial repeat of an utterance and a question word, etc.) I would also do the same on the board or on paper. I normally create a group on a messenger where I add all my learners – this gives me a chance to simply take a photo of my notes and send it to the group so that learners can compare their notes with mine.

In order to take a skill from the stage of unconscious incompetence to conscious competence learners need extensive practice of what they are learning, and this should start from controlled practice of isolated things. This could be done in a lot of various ways, for example:

Another possible activity is a disappearing dictation:

A chance to implement what has been learnt

Last, but by no means least, is having an actual conversation. All the steps above will have little value if we don’t give our learners a chance to have a conversation in class. While in most lessons we have a lot of speaking stages, they don’t always contribute to developing conversation skills, sometimes that’s because there hasn’t been enough clarification of speaking sub skills and strategies and hence learners are practising what they already know rather than developing the skill. Sometimes that’s because those speaking stages are individual presentations rather than conversations. Here’s a couple of final ideas on what I do to turn virtually any speaking stage into a conversation. Even simple pair checking of a multiple choice reading task can turn into a conversation if the students are asked to hide their answers from each other and explain their answers rather than simply say 1 is A. For instance, the students should say something like:

I thought that the author was positive about the experience of participating in a TV show because he thought this was the kind of change his students needed. Is this what you thought, too?

This can be made even more explicit if we remind the students to make sure the intonation should be going up at the end of the turn, and write this hint on the board like we did when making things visible.

A note on declarative knowledge

We said above that a friendly chat will sometimes involve transactional elements such as sharing news or a recipe. And it’s true that it’s difficult to remain an engaging interlocutor (and hence establish or maintain the rapport) if we have very little or nothing to say, or if we cannot respond to what we’re being told. This is why knowledge of interesting facts plays an important role in having a conversation, and it’s important to build up the knowledge bank in our students.

One way of doing this is through establishing a routine in which the students spend the first 5-10 minutes of the lesson on sharing what’s happening in the world. In this activity I would start by modelling what needs to be done (e.g. some recent news from the context relevant to the learners. In a Business English class this could be some news from the world of business, e.g. what conferences have been held in the world recently, an interview with Elon Musk, etc.). The task for students is to respond to this and be able to have a conversation. With time, students come to like this stage and the teacher doesn’t even need to initiate it. This also means that learners become more fluent at initiating a conversation, both in L1 and L2. 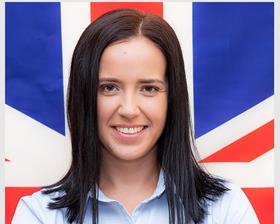 Kateryna Protsenko is CELTA / Delta / CELT-P / CELT-S trainer and materials writer currently based in Kyiv, Ukraine where she is managing the Teacher Training Department at Grade Education Centre. Before joining the company, Kateryna worked in Turkey, Ukraine, Lebanon, Azerbaijan, Thailand, the UK and Greece where she trained teachers and trainers.