Onestopenglish's love affair with Adrian Tennant began many years ago, resulting in a very long list of fantastic resources for the site. Here, Adrian talks about teaching and training all over the globe, as well as his fondness for a wise fool named Nasreddin. 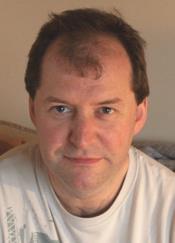 So, Adrian, tell us a little bit about yourself …

I never actually planned to become a teacher, it just sort of happened. After graduating with a degree in History from university I didn’t know what I wanted to do. While I waited for inspiration I had a number of temporary jobs – working in a motorbike factory, in a recording studio and as a ‘handyman’ in an office full of women! Then a friend told me he was going to move to France to start teaching and I thought, 'Hey! That would be a great way to spend a couple of years while I decide on a job I’d like.' So, I took a TEFL Cert course and then started looking for jobs. My first teaching job was in Las Palmas in the Canary Islands. I then taught in France for six months before moving to Budapest in Hungary, where I worked for six years.

It was during my time teaching in Hungary that I realized I’d found the job I liked – teaching. Even now, though I spend much of my time writing, I still have regular classes and still get a buzz from helping students learn. During my time in Hungary I was fortunate to do lots of teacher training, both pre- and in-service. I then moved to Ecuador where I was the ADOS at the British Council in Quito. By this time my daughter was six and we decided we’d move to the UK so that she could get a settled school and not have to make new friends every two years.

I now live in Nottingham and divide my time between writing, teaching and running teacher training courses, workshops and conference presentations around the world. I love travelling, and having the opportunity to work with teachers in lots of different countries is a joy. In the last year or so I’ve been fortunate to be in Pakistan, Croatia, Turkey, Serbia, Saudi Arabia, Poland and Nepal.

I was lucky to be in the right place at the right time. I was at an IATEFL conference in Dublin and on the last day a lady called Anna came up and asked if she could talk to me. It turned out that she was a commissioning editor from Macmillan Education and she had seen me in a couple of workshops, liked my comments and wanted me to do some writing – three months later I was writing. I started with small things, resource book worksheets, web guides and so on and then it just grew and grew. I started writing for onestopenglish in April 2002.

What’s the most interesting place you’ve ever taught?

Well, it depends whether we include teacher training. I’m lucky in that I get to travel a lot so I’ve visited some really interesting places. A few years ago I did some training in Kyrgyzstan and earlier this year I was in Kathmandu, Nepal. Finally, I’ve just returned from a trip to Sub-Saharan Africa where I ran a course in Kinshasa, Democratic Republic of Congo.

I’d have to say that it was a project that I did way back in 2001/2. I was asked to go to Tashkent in Uzbekistan and look at the possibilities of versioning a coursebook for the state school system there. However, within three days it became clear that to have appropriate material a coursebook series would need to be written specifically for the market. The publisher then asked me for my input and I suggested putting together a group of local teachers and writing with them. I spent a further ten days in Tashkent, interviewing potential writers, running training sessions and choosing a team of writers. I had eight people on my team writing three levels of a coursebook with me. Working with local people, writing a coursebook for a local context was great fun and nowadays I sometimes meet one of these authors at a conference or somewhere else and it’s great to see how well they are doing in their careers.

What’s the most embarrassing teaching moment?

You mean one I can put in print! One of the most embarrassing was when I was asked to assess a group of Kindergarten teachers on their final teaching practice for a course. I watched ten teachers each do a ten minute slot, although there were a couple of breaks for the children to go to the bathroom etc. But, the children had been there for around two hours when the session finished, and just think about this for three and four year olds! Anyway, at the end the organizer asked me if I could come up to the front and do a short lesson for the children. Within five minutes half of the children had got up and walked off, the others were looking at their feet, playing with their hair and so on. It just showed how well these teachers had done to keep the children interested and motivated for so long – I could hardly fail any of them after that!

I love puns and wordplay, but choosing one particular joke would be extremely difficult. But, I really find Nasreddin amusing. Nasreddin is a wise fool (!) and his character can be found in many cultures in the Middle-East and Central Asia. There’s a story about how Nasreddin’s neighbour came round one day and found Nasreddin sprinkling bread crumbs on the floor. He asked Nasreddin what he was doing and the reply was, 'I’m keeping the tigers away.' His neighbour replied, 'But there are no tigers here!' To which Nesreddin answered, 'Well, you see how well they work then.'

What are your tips for becoming a top ELT author?

I think that Lindsay and Jackie have said a lot of the things I would say. However, I’ll try to add a few more things to their lists.

The first is try to get yourself known. Conference presentations are one way as is writing for the Lesson Share competition on onestopenglish.

Secondly, don’t expect to start off by writing a coursebook. Have realistic expectations of what you can do and what you’ll be offered. If you prove yourself on smaller projects the big stuff will come your way.

Thirdly, meet your deadlines. Publishers want good quality, but they want it on time. You also have to remember that you’re part of a team. It might feel as though you are writing on your own sometimes, but there are various editors, design people etc who have jobs to do. If you don’t deliver on time you hold everyone up.

Also, be realistic – not everyone can write. You might be a good teacher but that doesn’t necessarily mean you’ll be a good writer. Any criticism you get has to be taken in a constructive way, however unfair you might feel it is.

Finally, writing is 90% perspiration and 10% inspiration. You need to enjoy the job to keep doing it. For example, you might love writing tests, but you have to be able to write the answer key as well, not just the test itself.