Author of our excellent Business Tasks series, Adrian Doff, talks about his interesting background teaching during troubled times in the Middle East, and teases us with a riddle about a joke concerning a penguin. 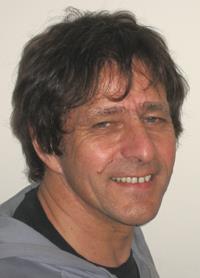 Like many people, I started teaching English as a way to live abroad, then I found that both language and learning were endlessly interesting, so I did an MA in Applied Linguistics at Lancaster University in 1971. This was the beginning of the ‘communicative revolution’ in ELT, so it was a good time to start. After that I taught in Yugoslavia and Lebanon, and also started writing with my co-author Chris Jones – together we wrote Meanings into Words (for CUP in 1981), which was our first main coursebook. After that I worked in Egypt, developing training courses for local training centres, which got me involved in teacher training. Since then I’ve mainly worked as a freelance EFL writer, based in the UK and in Germany.

The main books I’ve written include the coursebook Language in Use, the listening strand of the Cambridge Skills for Fluency series, the teacher training book Teach English, and the reference and practice book Language Links. I’ve also produced a series of business English modules for onestopenglish, called Business Tasks.

At the moment I’m living in Munich, Germany, which is a place I find very easy and pleasant to live in. I’m writing and teaching, and I also work as a trainer on CELTA courses.

still wondering what learning is

I was teaching English in Yugoslavia (at the University of Novi Sad) in the early 70s. I taught eight hours a week, had complete freedom to do what I wanted and didn’t like any of the books I was using, so I developed my own material. Then I got together with Chris Jones, who had the same job as mine at the University of Sarajevo. We started swapping ideas, then we thought we’d approach a publisher. Amazingly, we were accepted, and we published our first book together (an advanced conversation course called Feelings, sadly now out of print).

Where’s the most interesting place you’ve ever taught?

Beirut, Lebanon – I was Director of Studies at the British Council there in 1979-80, not long after the civil war. It some ways a bit too interesting, as the city was controlled by rival militias who often shelled each other, so it was sometimes too dangerous for students to come to class. But the students’ enthusiasm and optimism made it very rewarding to work there. I was lucky, because this was a time when it was actually safe to be a foreigner in Lebanon – two years later, foreigners started to become kidnap targets, and everyone left. But I was very struck by how people could combine being (justifiably) suspicious of Britain politically with being very friendly and hospitable on a personal level – this is something I’ve often noticed in the Middle East and which never fails to impress me.

My teacher training book Teach English. This came out of the work I did in Egypt in the 1980s, developing training courses for state school teachers. At that time (and probably still today) most methodology books assumed that you were a native speaker working in a private language school with lots of time to be creative, so they really had nothing to offer the kind of teachers I was working with. So I tried to give something to this other kind of teacher: people with not very good English themselves, traditional ideas, teaching classes of 50 or more, and with no free time or resources. With Teach English, I really felt I was entering territory where no-one had ever been before, which was very exciting. I was also very proud when someone told me they had seen the book in the window of a bookshop in Bhutan!

It was also my first teaching moment. Quite by chance, I got a job as a ‘reserve teacher’ in a language school in Bournemouth (with no training or experience – I was actually looking for a hotel job). The next day a teacher didn’t show up, and I was pushed into a class and told to teach modal verbs. Fortunately, the class were very nice to me.

Not actually my favourite joke, but a good EFL joke is the one about the man with the penguin. It’s also at the beginning of Andrej Kurkov’s Death and the Penguin, which is my favourite book at the moment (so, if you don’t know the joke, you can find it there).

Forget about what other people have written, what the market wants, what you think might make money etc, and write a lesson that is (a) completely different (b) what you would like to use yourself in class. Then get together with someone you get on with and throw ideas around. Then approach a publisher with your amazingly original idea. I wish I could do that!