CLIL and Competence-based learning a practical example: INEBI and BHINEBI

In this article the author explores the rationale behind CLIL education programs setting INEBI and BHINEBI as examples of learning integration in the Basque Country, Spain.

The Basque Country was granted its autonomous status in 1979 and since then it has been developing its own educational policies in harmony with the rest of Spain.

The main cultural feature of the Basque Country is the fact that it is a bilingual community: both Spanish and Basque are spoken as mother tongues. Basque is spoken by roughly 30% of the population and Spanish by 100%. This has had a tremendous impact in the education system: in the space of 30 years it has evolved from a monolingual system, where only Spanish was used as a means of instruction, to a bilingual system where both Spanish and Basque are used as teaching languages, to an increasingly plurilingual system where English (and to a lesser degree, French) are being used as means of instruction.

It is in this last stage of development that we need to place INEBI and BHINEBI: INEBI stands for English through Content in Primary Education in Basque (Ingelesa Edukien Bidez) and BHINEBI is the same for Secondary Education (Ingelesa Edukien Bidez Bigarren Hezkuntzan). INEBI and BHINEBI are both programmes designed to introduce a CLIL-based approach to the teaching of English as a Foreign Language and are targeted at the English classroom and not to the teaching of particular subjects through English, though the materials produced have been used for that purpose in several schools.

The following diagram shows the use of different Content-based approaches to the teaching of languages in the Basque system and where INEBI and BHINEBI integrate in this continuum:

Anchor Point:2INEBI and BHINEBI: The general objectives and overall approach

As we have already mentioned, the design of these two programmes is content driven but they are orientated towards the acquisition and learning of English. For the learners themselves language is the tool to learn the content, while from the teachers’ point of view it is the tool to create not only language learning processes but also to enhance the cognitive processes that are going to help learners to develop the basic competences that are the main goal of the Spanish and Basque new curriculum.

The Lisbon European Council called upon the Member States, the Council and the Commission to establish a European framework defining ‘the new basic skills to be provided through lifelong learning: IT skills, foreign languages, technological culture, entrepreneurship and social skills’ (European Council 2000, paragraph 26).

The Stockholm European Council of March 2001 confirmed the importance of these issues and defined the improvement of basic skills, ICT and mathematics, sciences and technology as priority areas. The Commission set up a working group of experts designated by the Member States for each of the three priority areas mentioned above. After a series of meetings in the autumn of 2001 and spring of 2002, the group on basic skills suggested the following eight principal domains of key competences (European Commission 2002c):

These European Key Competences feature in our own curriculum in slightly paraphrased form and are developed in learners during the compulsory period of education (6-16) and are evaluated in two stages in Primary 4 and Secondary 2. The new educational law also states that each curricular subject has to contribute to the development of these key competences. So how do INEBI and BHINEBI contribute to this?

Content is approached from an experiential starting point as a basis for developing structured knowledge, not only from the point of view of the subject, but also that it can be incorporated into overall personal development.

The units in this proposal constitute a series of activities systematically sequenced towards a final product which allow for learning processes where the learners develop: general cognition, declarative knowledge of the topic or subject and awareness of the value of their learning for their own lives. We may visualize it this way: 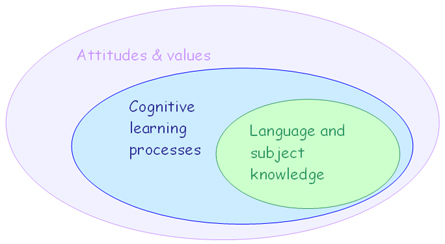 Both when selecting particular topics and when designing the activities, language requirements are very carefully taken into account. These are the main criteria: 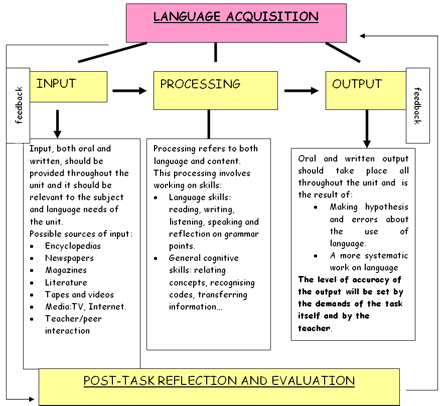 We have also made John Clegg's statement our own:

"The implication of this approach is that language is fundamental to learning in school in general. It is especially important in the form of language skills (listening, speaking, reading and writing) but also learning skills, cognitive processes and concepts both related to subjects and to language learning. This should not be the exclusive domain of language specialists."

It is quite obvious that the learning of a foreign language, or any language for that matter, helps students understand the implication of having to communicate, learn, and even work in a different language. INEBI and BHINEBI fully agree with Professor Do Coyle’s 4 Cs approach to CLIL: 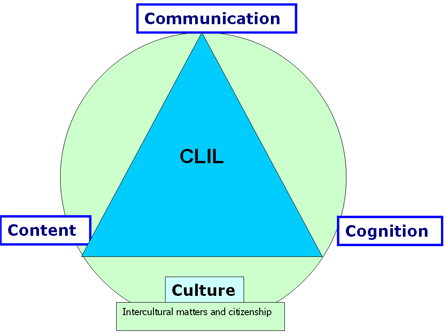 This intention can be reflected in the particular choice of topics in BHINEBI. The starting point of BHINEBI is a unit called Europeans, the second year is called Citizens of the World, the third year Discovering Myself and the last year of compulsory education, Discovering Universal Culture. The titles in themselves reflect the desire to make a very explicit choice as to what should be the content selected to teach language through this approach.

There is frequent talk about the need to 'upskill' the population to go on learning in knowledge intensive economies like ours. This upgrading has to be an open-ended process, which starts with a good solid basic education and is sustained through lifelong learning. Subject related factual knowledge is increasingly rendered obsolete by the pace of technological progress. Relevant factual knowledge can be accessed and transferred with the help of new information and communication technology. It is crucial then that we ensure in education that all learners have equal access opportunities to these technologies and that they learn how to make use of them to create new knowledge. INEBI and BHINEBI integrate the use of all these technologies with the dual goal of enhancing foreign language learning and creating lifelong, autonomous learners.

INEBI and BHINEBI reflect a series of beliefs and assumptions about the teaching-learning process that underlie the materials and guide us through the process:

As a conclusion, we could say that we want our students to become not only competent English speakers but also to become self-motivated, self-directed and problem solver learners so that they can fully integrate in the new knowledge society as active and responsible citizens.