In the latest instalment of the Tech Tasks series, Tom Walton looks at different ways that lists can be used in the classroom to create debate and develop speaking skills, and which websites can be used for this type of class.

Why I love lists

For lots of different reasons, I love getting my students to create lists. You’ll notice from my list below that three items are missing: I like to do that as an activity, i.e. get my learners to complete a list (and if you’d like to help me complete this one, pop your suggestions in the comments!).

It’s also fun to start with no items on the list and get the students, in small groups, to generate all the ideas. They can then compare their lists with those generated by other groups, and then, as a follow-up, agree on a single class list and rank the items. Or you could find a list online (see ‘Sites which contain lists’ below) then ask your students to compare a list they create of the same topic with the original and see how many items corresponded (and which list they prefer).

There are so many different things you can do with lists! 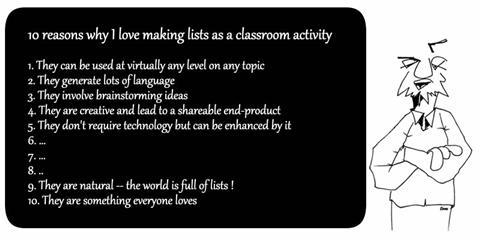 A note about levels

Most of these ideas will work at different levels. The lower the level, the more whole-class work you should do so you are able to provide essential language whenever it is required. The higher up you go, the more work in pairs and small groups you could do, so students get practice debating and peer correcting. You want your students to debate what should and shouldn’t be included in the lists. With higher levels, you might also want them to use a little more technology, especially if they exploit the possibilities for debate provided by the ‘comments’ tools that come with most of the tools mentioned below.

The words we already know.

This idea is for beginners in their first class: can they list the English words they already know, including ones perhaps now used in their own language? Can they think of 50 words within five minutes? It’s fun on an interactive whiteboard, as you can then save the words as an image and a record of their first class. As a follow-up, before their next class, can your learners make a note of any other English words they see or hear? It’s important to demonstrate to them that they already know some English, that it’s all around them and that they understand bits of it! For slightly higher levels, you could do the same thing when you begin a new topic: what words do they already know relating to the topic?

Three things no one (or hardly anyone) knows about me.

This works well as a getting-to-know-each-other activity. Your learners should produce their list anonymously, including only things they are comfortable sharing with others, and they could, optionally, include at least one thing that is not true. We should all read everyone else’s list (include your three things too!) and then see if we can guess who is who. If you’re doing it on the first day with a class, you might want to use pen and paper, and pass the lists round (or pin them up on a wall). A Google Drive presentation, however, is super easy to set up and share. If you have sufficient technology in your classroom for everyone to access it, ask each student to write their three things on a separate slide.

This works well as a getting-to-know-each-other activity, with students in pairs discovering what their partner has on their to-do list (assuming that everyone has one, that is!). Once each student has written down three to five items on their partner’s to-do list, these can be shared, as above, and we can attempt to guess who is who. Alternatively, we can see who can produce the best to-do list for a lazy Sunday.

Ten tips on how to …

For this you should try to put your students into pairs in which both partners have experience and knowledge of the same thing – ‘How to improve your smartphone photography’, for example. They should then come up with a list of ten tips which they then present to the class, for which Google Drive presentations are fantastic. A topic that is related to what’s in your coursebook is always great, but will depend on your students’ interests.

If there’s one thing people seem to like more than lists, it’s quotations! If you’ve been discussing a particular theme, perhaps in your coursebook, ‘Top ten quotes’ on that theme makes a nice alternative to favourite quotes (your students can Google for them, of course). Padlet is very easy to use if you want an online space to collect them. For extra language practice you can collect lots of quotes and then debate which ten should go on your definitive list.

You could do this directly on the board as brainstorming activity, but if you have an Edmodo group or a G+ Community, your students could start by each (or each pair) proposing one name along with a justification, which their peers can then respond to via the comments. You then want a stage at which we discuss what might be missing and/or what should be eliminated. A vote could be taken to pick the definitive 25, for which an Edmodo poll or a Google Drive form are great. As a follow-up, your learners might like to find out how many of their choices are on the lists in Rolling Stone magazine, which has both a list of 500 greatest albums and 500 greatest songs.

My top ten albums: If you don’t know who they are, but you have two minutes on your phone, find out! 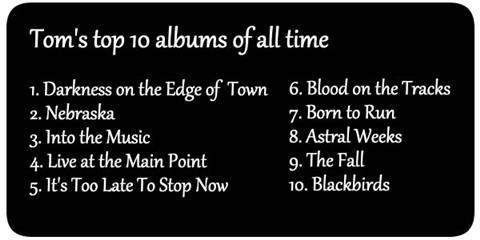 This works well if you have a digital space like those mentioned above. Again, you should get lots of proposals (your students could all come up with their individual lists), and if you have somewhere to post their proposals, they can be accompanied by YouTube videos of favourite scenes, trailers, etc. Justifying inclusion is a fun writing activity, and you can again reduce all the nominations to a definitive list of ten by a class vote. Insisting that the definitive list has to be ranked will also lead to more debate. The top ten films of all time is an obvious alternative.

My top ten TV series. If you don’t agree, leave some feedback and let me know your favourite shows!

Once you’ve reached the end of a coursebook unit, this makes a great revision activity for just about any level on any topic. Ask your students to go back through the unit, and any other language that came up in class (or for homework), and choose the ten words or phrases they think are most important, most useful, most essential, etc, for talking about the topic. If your lists are vocabulary lists, Memrise and Quizlet are two really great apps! Alternatively, your students can create a word cloud using Wordle to present and record the words.

The best 11 footballers ever.

I live in Barcelona, where we are just crazy about football, and this one always works because it seems to generate endless debate (not to mention examples of comparatives and superlatives!). The 11 players should be in their correct positions (you can’t have two goalkeepers, for example!). If your students create their teams in small groups, they can then determine the tactics for their team and debate what would happen if their team played another group’s team. Anyone not interested in football should be the person to present the team and justify it to the rest of the class – for which they obviously need to be prepared by their peers. For those of you unfamiliar with the language of football, this might be useful.

This works well as an ongoing, mini-presentations project with one student or pair of students making a brief presentation to the class once a week. It can be any app or website, but ones that are used or read in English are obviously most interesting, especially if they are directly helping to improve the language (such as Memrise or Quizlet, already mentioned above, or the BBC’s Learning English site). What are your learners doing to learn English independently outside class? That’s a key question, and something you want to encourage!

Other apps and online tools for creating lists

Apart from the tools already mentioned above, List.ly is probably the best online tool for creating lists. Alternatives include Tackk, which isn’t really intended for lists but is excellent if you want somewhere to collect videos, etc, or Tricider, which gives you some quite sophisticated brainstorming and voting tools.

Unless we’re going to use them a lot, I generally avoid asking my students to download apps on their phones, but there are things for brainstorming like iBrainstorm (for iPad and iPhone only), and for to-do lists, your learners might like Everlist (IoS only). Realtime Board is another interesting collaborative tool.

Another way your students could use technology would be to turn their lists into infographics, for which they have tools like Canva or Piktochart or Visme.

Bonus idea: What to do with lists of irregular verbs? Don’t just photocopy them and tell your students to learn them all. Read my blog on this here.

You’ll find lists everywhere if you keep your eyes open for them. Facebook and Twitter are full of them, as are most newspapers – many of them lists of things your students could also create.

Alternatively, try BuzzFeed or Bored Panda, though some of their ideas are definitely not going to be suitable for class!

If your students love cinema, the WatchMojo YouTube Channel is another great source of inspiration for lists.